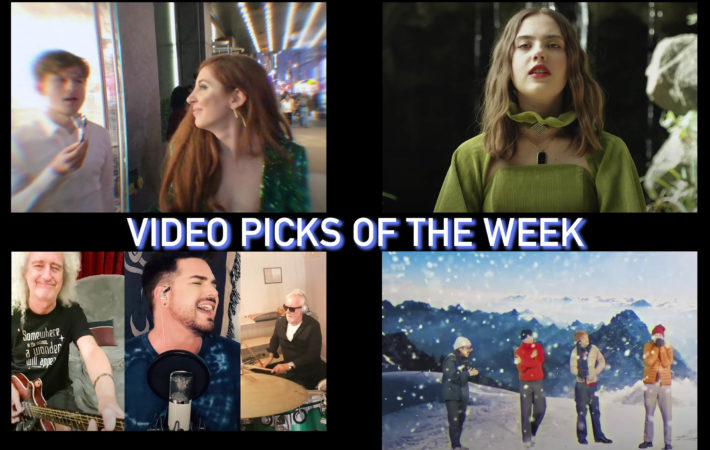 It is hard to not feel a bit nostalgic when seeing this video by Carly Shea about a wild night out and about in Manhattan. “Don’t Waste My Time” with boring stuff, Carly sings and comes up with some good ideas off the beaten track. She explains:

The video is about an “Anti-tourism Guide to NYC”; rather than places like the Empire State, it’s about it’s people/emotions that bring us together such as “Stop Acting Your Age” and “Give Back to the People”– we abandon a Michelin style restaurant to support what we love, Iconic Ray’s Candy Store, eccentric psychics, and the city itself.

You probably already know how a heartache feels like, but wait until singer/songwriter Odina shows you hers. Either you will wallow in nostalgia or — if you happen to be in the thick of it right now — the song and video may offer you a dose of healing compassion.
Watch the video now:

Queen & Adam Lambert – You Are The Champions

Making the best usage of what technology has to offer, Brian May, Roger Taylor, and Adam Lambert collaborated via Instagram between their homes in London, Cornwall, and Los Angeles, respectively. They home-recorded a spontaneous new version of Queen’s classic anthem with some subtle yet important changes. The proceeds of the now mixed and mastered results are going towards the Covid-19 Solidarity Response Fund for The World Health Organisation. In addition to Queen’s and Lambert’s material, Shutterstock and its global community of videographers donated high-quality footage clips to use in this video, which can be found here. The video is directed by Drew Gleason & Tyler Macey, and edited by Tyler Macey.

While it is surely a long time ago, that I heard “We Are The Champions” for the first time, I got the same excitement and joy when watching the video for this new version, hence we wanted to include it in the glamglare mix. Oh, and Brian  May has easily one of the most interesting artists IG accounts, so much joy and so much to learn!

As fans of New Orleans-based quartet Video Age (see our Song Pick feature Shadow on the Wall) we also dig their joyful and optimistic new video for “Aerostar”. The track is part of their third album, due August 7th. Ross Farbe says about the new track:

“I’m often trying to create a more idealized version of the world I’m in.”