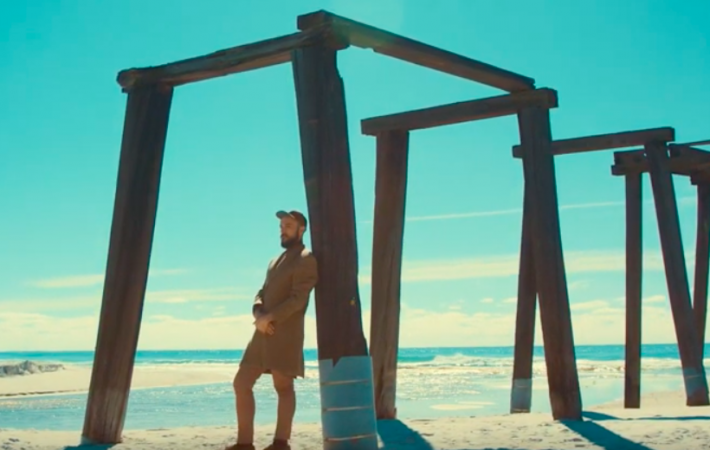 Admittedly, the new single by Nashville singer/songwriter Matt Lovell got me by its title “Alligator Lilly” which simply sounded fun and intriguing. Thanks to a quick search, I now know that this also is a Florida-native flower to be found in wet marshland but this might not be all the artist had in mind… In his vibrant, upbeat and utterly feel-good music video, Matt Lovell dances and sings on the beach, watches out for the four-legged alligator, and makes use of some cool effects in the editing process. Just watch the glorious, Wes Anderson inspired video and experience it for yourself.

“Alligator Lilly” marks the second single from Matt Lovell’s debut album “Nobody Cries Today” (out June 5th), and he says about this record:

“I’m now on the other side of that long nighttime, and I’m so excited to sing these nine songs again—for anyone who will listen. Nobody Cries Today contains every bit of earnestness, desire, and love that I have to give. These are songs that have brought me so much joy and healing over the years.”

Having learned more about Matt Lovell, the more I am impressed with the exuberance in the song and video, and I am very glad to know that the artist could overcome all this incredible hardship, as the press copy reads: In January 2017, shortly after he finished recording the album, Matt was carjacked, shot point-blank in the chest, and left for dead. He was miraculously rescued by a bouncer at a nearby bar who happened to be an EMT and spent the next two years recovering from his injuries – physical wounds and a major bout of PTSD.

Matt says further about his album:

“In these years of writing and recording, I have gathered quite a wild palette of paints.  In a way, Nobody Cries Today has actually been my teacher.  As I have written these songs, each of them has been like a tiny rowboat to get me from one day to the next.”

What beautiful advice! Just let’s get from one day to the next, and enjoy beautiful songs and videos along the way. Watch “Alligator Lilly”, our Song Pick of the Day, now:

Connect with Matt Lovell on Facebook, Twitter, and Instagram and add “Alligator Lilly” to your playlist as we will add it to our #glamglarepick playlist on Spotify.