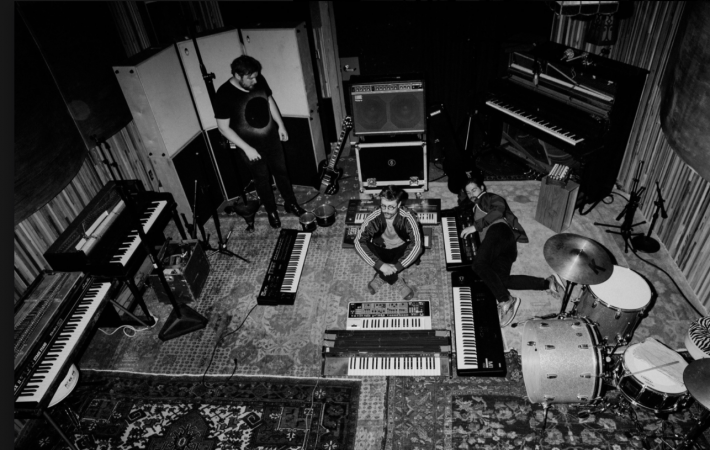 “Jogging / Neon Forming”, the new single by Birmingham-based eclectic indie rockers Wray is beautifully comforting in its lush harmonies and mesmerizing in its built. It manages to transport us back to long lost childhood memories, and the times when synth-pop laden bands became big. Especially the second part of this double-single “Neon Forming” lets our thoughts wander and roam. Yet it is “Jogging” that made me fall in love with the track in the first place. Comprised of David Brown (bass, vocals), David Swatzell (guitar, vocals), and  Blake Wimberly (drums) Wray give us a great taste with their newest single of what to expect from their full-length album out in June this year.

We wanted to know more, and reached out to the three-piece, asking for a bit of background to the gorgeous track. David Brown provided us kindly with the following:

“I remember we worked on this track for a while. It was originally even longer so the song has always felt like a journey. Maybe that length inspired the lyrical concept. I wanted to write about growing up in the suburbs here in Alabama. I was thinking about my hopes and expectations as a teenager and how they have changed. I was also thinking about an old friend who I lost to opioid addiction.”

Listen to “Jogging / Neon Forming”, our Song Pick of the Day. Enjoy the dreamy video along the way:

Connect with Wray on Facebook, Twitter, and Instagram and add “Jogging / Neon Forming” to your playlist as we will add it to our #glamglarepick playlist on Spotify. Pre-order the album “Stream of Youth / Blank World” via Earth Libraries, out on June 5th.