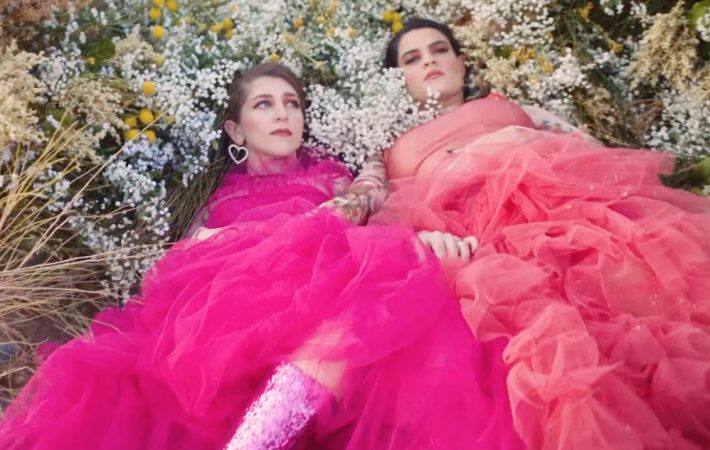 Overcoats are Hana Elion and JJ Mitchell, who met at college, where they discovered their common love and talent (!) for harmonies and songwriting. They are about to release their second full length album “The Fight”, and have further developed their unique and utterly charming style. Gone are the days of minimalistic (bedroom) production, and when they hauled lots of electronic gear on stage because most recently I saw them on guitar (Hana) and bass (JJ) respectively, together with another guitarist and drummer on stage. No big electronics but basic rock instruments. I got quite the Warpaint vibe, the all female rock quartet dear to glamglare, and I have heard that Hana and JJ are pursuing the sounds of the likes of Radiohead, Tame Impala  or Kings of Leon. Their new video “Fire & Fury” taps in to the vibe of the latter, because a Nashville-tinged rock band feel is definitely noticeable.

With its more pronounced indie rock vibe, “Fire & Fury” is yet another lush and gorgeous new track by the New York-based duo, who are currently supporting Cold War Kids on tour but will go on a headlining spree themselves come April, with a stop in Austin for SXSW beforehand.

Listen to “Fire & Fury”, our Song Pick of the Day:

Pre-order “The Fight”, out on March 6th, and add “Fire&Fury” to your playlist as we add it to our #glamglarepick playlist on Spotify: