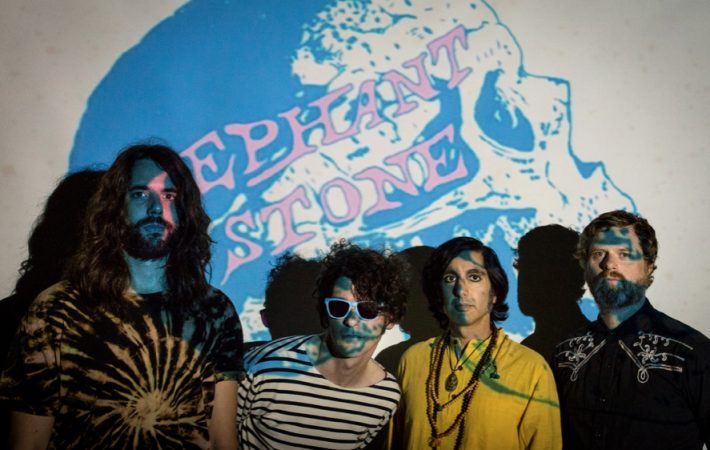 Trying hard to not be intimidated by the impressive œvre and track record of Montreal-based psych rockers Elephant Stone, led by highly thought-after singer, bass and sitar player Rishi Dhir, just released their last single “We Cry for Harmonia”. The track announces their upcoming fifth full length album “Hollow” for February 14, out on Fuzz Club. The description of the album sounds fascinating because of its arch that holds all tracks together. The fictional underlaying idea will provide the perfect backdrop for fuzzy, psychedelic sound and beautiful harmonies:

“From Side A (The Beginning) though to Side B (The Ending), the story told through Elephant Stone’s renowned garage-psych alchemy on Hollow, takes place immediately after mankind’s catastrophic destruction of the Earth; and what happens when the same elite responsible for the first world-destroying climate disaster touch down on New Earth, a recently-discover planet sold with the same life of prosperity as the one they’d just destroyed? As soon as the chosen few step off the Harmonia ship built for the journey, it’s clear that all is not what it seems and humanity appears destined to make the same mistakes: the storyline touches upon the plundering/poisoning of their home, the elite, demagogues, false idols, the truth as seen by children, and, ultimately, the fight for the survival of their species.”

Listen to the utterly gorgeous “We Cry for Harmonia”, our Song Pick of the Day:

Indulge even further into “We Cry for Harmonia” and the watch the animated music video, directed by Mike Turzanski: