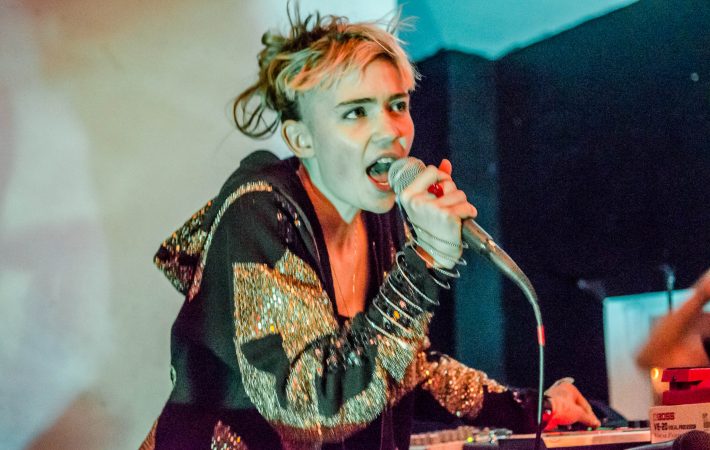 Grimes aka Claire Boucher aka c will finally release her fifth album „Miss Anthropocene“ on February 21, more than four years after her last one „Art Angels.“ The world of Grimes surly has become ever more complex and not everything she does fully rings true anymore, but I am still all for declaring her as the artist of the decade as somebody who drove her own vision and beat the music industry with persistence and hard work. And in 2019 her music is still a delightfully weird and innovative angle on pop music and nothing about her is ever boring.

The aesthetics of “Miss Anthropocene” are dark and futuristic, but we could not get hold of an official press shot. Instead the photo above is a glamglare original from a Grimes show in 2011 for the Gorilla vs. Bear CMJ showcase at Shea Stadium in Brooklyn. Claire herself probably does not have good memories of that show, which was riddled by sound problems. Still, after seeing her playing back then, it does not come as a surprise where she is today.

Listen to our Song Pick of the Day “My Name Is Dark,” the latest single of “Miss Anthropocene” on YouTube and Spotify:

Update: Watch Grimes explaining the lyrics of this song: