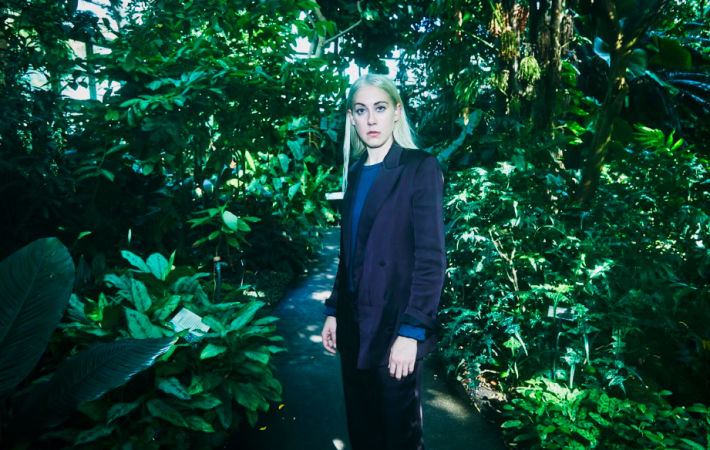 It feels like not so long ago that I first saw Mackenzie Scott aka TORRES live and consequently fell in love with her story telling, her fascinating vocals and beautiful guitar driven sound.  This was in Austin, 2015 when TORRES played one of the last sets of the SXSW music festival, still promoting her exquisite second album “Sprinter”. And yet, January 31st, 2020 sees already TORRES’ fourth album. Named “Silver Tongue”, the album will be one of the musical highlights of 2020, for sure.

“Good Scare” holds some of TORRES’ signature features like Scott’s distinct way of singing or playing guitar but there are also a few new aspects to notice. Maybe this has something to do with the fact that for the first time, Scott has produced her album solely by herself without external influences? Here is a musician who found her style and is able and willing to pursue her vision even if this means changing a label. (“Silver Tongue” is being released via Merge Records).

When asked about the first single from her upcoming album, Scott reveals the following insight:

“Regarding ‘Good Scare,’ I guess I could say that falling in love is a lot like the Superman crawl. If you’re not familiar with Superman’s crawl, it’s a terrifying maneuver used in spelunking that’s only performed when certain passages are too narrow, so a person has to hold one arm against the body and the other above the head, all while trying to crawl forward. When you fall in love with someone, it’s scary like the Superman’s crawl, but you have no choice but to keep moving forward even though you have no idea what’s ahead of you.”

Yes, falling in love can definitely feel that way and sometimes it does not work out but when it does, the leap of faith was so worth it. Here’s to accepting the “Good Scare” and long lasting, happy love!

Listen to “Good Scare”, our Song Pick of the Day: