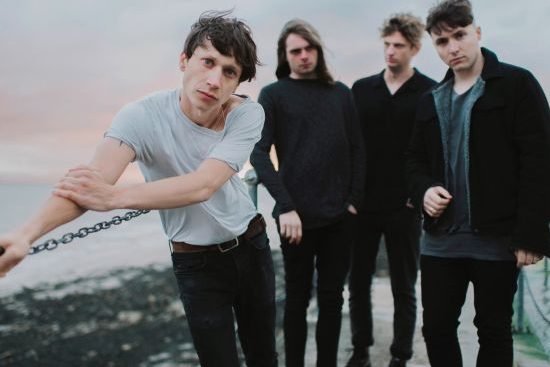 “Forever Whatever”, the new single by English indie rock quartet October Drift comes with a significant dose of melancholy which is not surprising given the song’s title. However, as with all great rock songs, the nostalgia is counterbalanced by an overall optimistic vibe. When asked about the inspiration to their songs, frontman Kiran Roy explains:

“We’ve never really cared about being fashionable. Most of our peers are making politically charged music – which is understandable and important – but that’s not what comes naturally to us. We’ve always written from a space that’s more personal. I take my faults and fears and mould them into something more positive; be it loneliness, teenage angst, or inadequacy.”

Totally fine in my book because music after all is something very personal and the big sociological topics don’t need 24/7 reflection otherwise we’ll get rather unhappy and numb. Roy reveals further:

“I try to put a positive spin on these internal struggles in the hope that a feeling of optimism will reflect onto listeners who are dealing with the same emotions. My favourite music always feels relatable, like you’re feeling the same as the artist, even though their intention might not match your interpretation. That’s what we’re aiming for in our lyrics – a relatability to everyday life.”

Beautiful music paired with resonating lyrics and gorgeous vocals that sing them, that makes us choose “Forever Whatever” not only as our #glamglarepick but also anticipating the equally named album, which will be released on January 24th via Physical Education Records. Listen now to “Forever Whatever”, our Song Pick of the Day via YouTube Audio, Apple Music or Spotify: