Laveda is based in Albany, New York and has only released two singles so far, but this duo is definitely up to something. Ali Genevich and Jake Brooks take classic shoegaze as a cue and craft energetic, fresh indie rock tracks. Listen to “Dream. Sleep.” and “Better Now”.

Read on for some more insights about Ali and Jake and their music:

How did you start Laveda and how has your music evolved?
JAKE: We started out as a bedroom recording project, writing and recording mostly acoustic songs. Right around the time we were recording our first few tracks, we started getting into bands like Slowdive, Wolf Alice, and Indoor Voices. We both experimented a lot with pedals and layering tracks on top of one another until we felt totally satisfied with the sound.
ALI: One time we were jamming together and it was like in that very moment we realized that we found the sound that we’d both been craving for for years without even knowing it. And we’re still sort-of finding it, cultivating it all the time with each new track that we’re working on.

Do you write your songs together? How does a typical Laveda song writing session looks like?
ALI: It’s kinda a mix but a lot of the times yes we do write together. We’ll just kinda make noise until one of us has an idea that the other clicks with. Sometimes Jake will mess around with a drum machine or a synth. Sometimes Jake will just play pedals. More often we’re both playing electric guitar and I’m singing some melody made up of nonsense words. To give you an idea, just picture any bedroom or DIY home studio filled with amps and speakers, a bass, a few different guitars, and lots and lots of pedals.

Vocal effects are a staple in the current pop music. You used them in a special way in your latest song „Better Now“. What is the story here?
JAKE: It was a low key total accident actually. We were at Hook & Fade Studios with Dylan Sky in Bushwick NY trying to get a good drum grove for the track with an acoustic kit. It really wasn’t working so we threw the track into Ableton to sample the kit and play the grove on pads. In doing this we accidentally both sped the master track up and tuned it down 5 semitones. It gave the instrumentals and vocals this cool warbly texture and sound that we all really liked. We ended up tracking electronic drums and some more guitar and synth tracks on top of the warbly stuff and it became a total vibe! In the final draft of Better Now we ran all of my vocals through the pitched down processor to give it that crazy low sounding warble. We ran all of Ali’s (vocal) doubles through the pitched down effect but ended up keeping the normal pitched main vocal and using the pitched doubles as a way to get a cool blended sound. 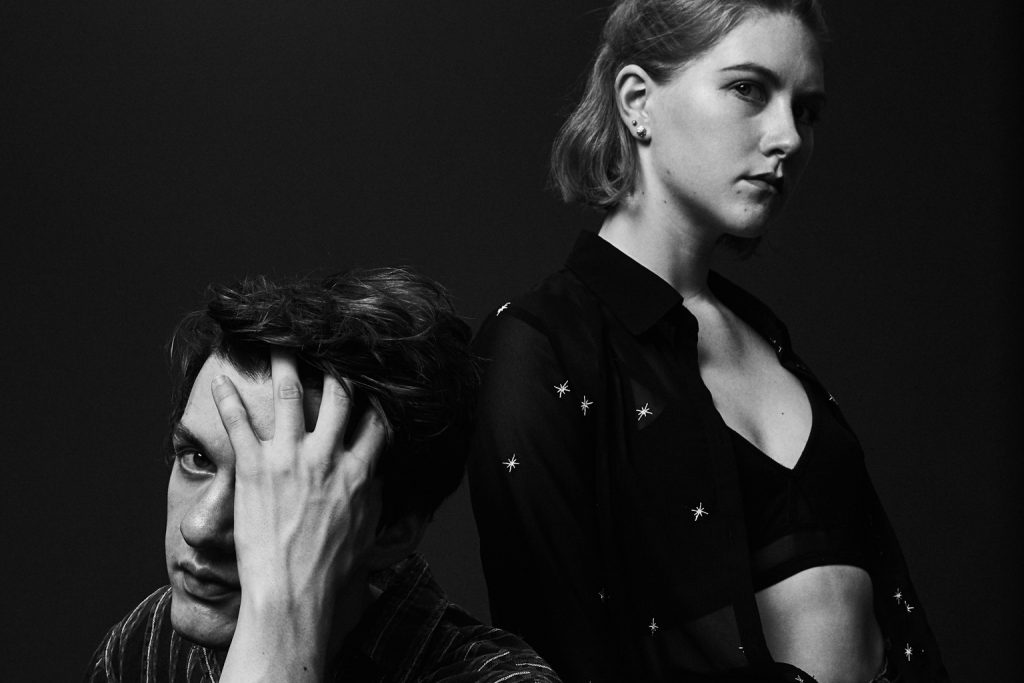 You are based in Albany, NY. How is the music scene there?
ALI: It’s honestly really good. You have to look past a layer or 2 so to speak. All the really cool stuff is happening down the street in your friends basement. Bruiser and Bicycle, Lone Phone Booth (our roommate), So Doo Koo, and Another Michael (from Albany but now based in Philly) are just a few of our favorites.

Are you planning to take the plunge to NYC or any other city with a bigger music scene at some point?
ALI: Honestly we think about doing it all the time. Brooklyn is definitely a second home to us and a really cool place with a lot of great things happening 24/7. We’re not sure how practical it is to move there given how much we’re planning on touring though.

If you could choose, which decade would you live in, for its music, style, fashion?
ALI: Not gonna lie, it would have been sick to see My Bloody Valentine or The Sunday’s in some club back during the early 90s. All the shoegaze/indie rock coming out of that period is a huge inspiration for my writing. Otherwise, I would say I’m pretty stoked to just be alive now. I feel like you can wear whatever you want in today’s day, which is totally sick. Street style right now is pretty rad. I’m psyched about this pair of black cargo pants I just got at a thrift store the other day. In terms of the overall scene right now, I love seeing and being apart of the rise in more female fronted bands and female band-members that’s been happening.

JAKE: I would say today because I can listen to whatever I want whenever I want to! There is an endless amount of awesome music out there that’s accessible, from ambient instrumental tracks to loud slow core and pretty much anything you could ever think of. There’s actually something for everyone if you just look for it. And I feel like men’s fashion is a lot more accepting of unique styles than it used to be even 10 years ago.

Thank you, Ali and Jake! We are looking forward to catch you at a show here in Brooklyn!