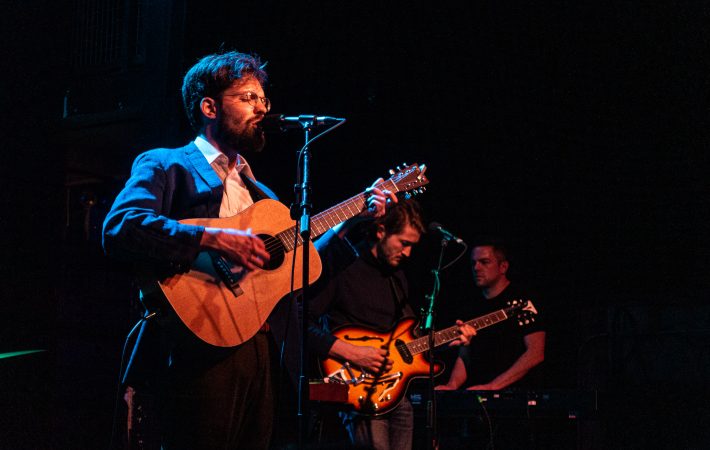 Sometimes it is possible to catch the same artist at two very different occasions and locations, which can particularly highlight great songwriting and musicianship.

While attending Welcome Campers festival in Massachussets over Memorial Day weekend, I was eagerly awaiting the closing act of the intimate event and when Henry Jamison took the Lake Stage, I was definitely not the only one. Some had moved up their blankets as close to the stage as possible, hanging on the artist’s lips when he started to enchant us all with “Gloria” the wistful opening track of his superb full length album “Gloria Duplex”.

Then, only a few days later, the Burlington, Vermont-based singer/songwriter and his three-piece live band were playing their third to last show of their album tour at Brooklyn’s Rough Trade and their performance was every bit as beautiful and enthralling as the open air version I could enjoy a couple of days earlier.

Without having read up all there is to know about the hauntingly beautiful song, I can tell that  the Gordon Lightfoot classic “If You Could Read My Mind”, the song itself but also Henry Jamison’s cover version have a special meaning to him and might have been pivotal to his success. It also speaks for Henry Jamison’s own craft and wonderful œvre that the Lightfood classic marks a highlight, an anchor during his live shows.

I was hugely impressed how amazing songs from “Gloria Duplex” but also from his 2017 debut album  “The Wilds” sounded and when I complimented Henry Jamison after the show how mesmerized I was and how absolutely fantastic they sounded, he answered very matter-of-factly “we worked very hard to make it sound like that”. Mission accomplished!

Sadly, by now there is no more stop on this tour left but there are already a few new shows on the horizon. Bottom line, if you are into modern and intelligently made singer/songwriter sound, then listen to Henry Jamison and go see him live. Next time.

Listen to “Gloria Duplex” on Spotify or Apple Music: