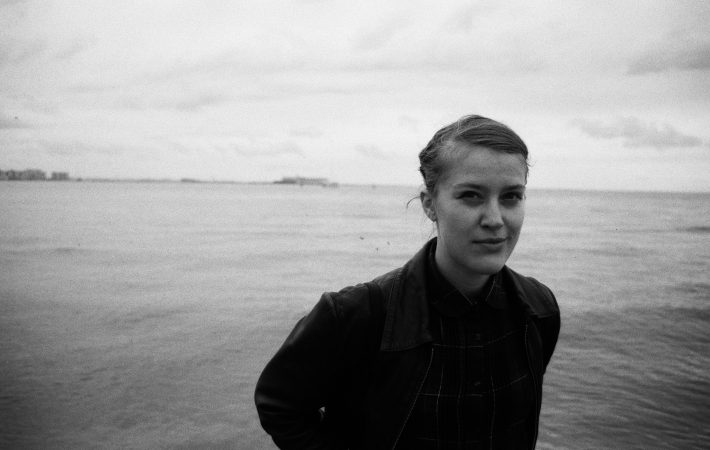 Irina Shtreis is an Iceland-based musician originally hailing from Russia. When we met her at a social gathering during the fabulous Iceland Airwaves festival in Reykjavik, we chatted about various things before Irina revealed that she has been working on two connected EPs over the last two years. She recorded those two albums herself and performs them under her artist name Miss Naivety.

Like the namesake geometrical problem, Irina approaches a difficult question with the EPs.

“’How to Square the Circle’ is the concept for the album comprising two parts”, she explains. “Both EP’s explore the theme of connection occurring between people despite space, time, cultural misunderstandings and different backgrounds. With the title referring both to alchemy and the mathematical conundrum, it implies the attempt to go beyond the boundaries of assumptions and expectations that cause the same mistakes being constantly repeated. Generally speaking, it is an attempt to learn how to avoid these mistakes and understand the essence of love which means acceptance and readiness for a change.”

The music of the first EP is intimate and fragile. Irina uses rarely more than one instrument, guitar or keyboard per song and adds field recordings and ambient noises sparingly. “How to Square the Circle II” continues the theme, but feels overall tighter and richer.

“The second EP, though, suggests thinking about such things more globally,” Irina says. “Not only it mentions the bonds that occur between individuals but also highlights the processes in the world that inevitably tag us as irreconcilably different and place upon the opposite sides of the barrier. The language barrier, political barrier, the ‘circle’ barrier. Yet, there is always a chance to look from another perspective with which the assumptions vanish and pure gold remains.”

Throughout both EPs Irina uses recorded voices to add depth and mystery to the records. A particularly beautiful piece is the intro to the sixth track “Balti Jaam”. She gives some background:

“The final track on How to Square the Circle II is preceded by a poem ‘A Valediction: Forbidding Mourning’ written by John Donne (read by Richard Burton), a metaphysical poet of the early 17th century. It emphasizes the stoicism of lovers before parting and acceptance of the temporary separation.”

Both EPs feel deliberately crafted and the concept behind them carefully thought through. For this it comes somewhat as a surprise that Irina composes her music way before the lyrics come into play:

“The songwriting process starts within my comfort zone territory but mostly is triggered by my experience of going beyond its boundaries. It usually begins with playing the same pattern over and over again unless I understand that it’s worth recording a draft with a digital dictaphone. Then I start singing with words that sound “smooth” in a particular musical context. Producing and editing actual lyrics takes a little longer time that all described before.”

“I did the recording and mixing for both parts by myself. This is the approach I’m largely relying on – it might take time to analyze what sound is needed but eventually I find it easier to work on music individually than in collaboration. This, though, doesn’t mean that I wouldn’t be happy to find people who are musically on the same wave and willing to do something together. Finding your people must always be appreciated.”