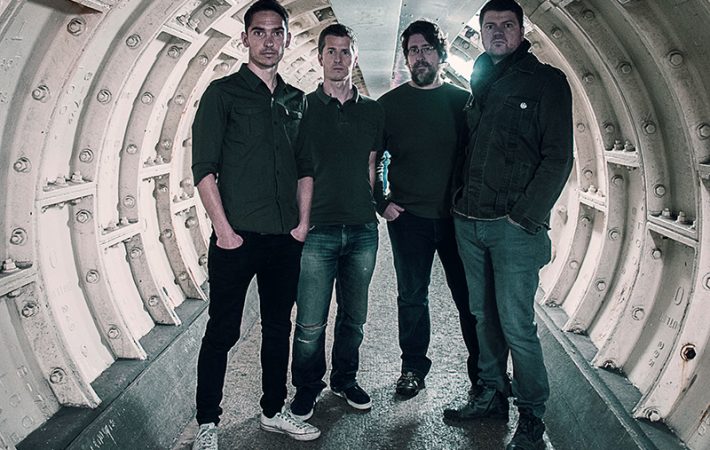 Despite its apocalyptical visuals and fiery message, “Broken Ship” by AKIVA also comes with a dose of optimism. As long as there are people who take their feelings and beliefs and transform them into compelling art, not all is lost! Based in Bedfordshire, a county in the East of England, AKIVA are comprised of Malcolm Carter (guitar, vocals), Rob Mercel (bass), Dave Mercel (drums) and Dave MacKenzie (vocals, guitar, synths). When asked about their music, the band provides:

“Our songs tend to have a heavy theme of conflict and aggression running through them lyrically. Grab a beat, a bass line, add a view of the world and you’re on the right track.”

There is no doubt that “Broken Ship” is very dear to the band’s heart and their frontman explains further:

“Our country has a lot of problems at the moment. I can’t help but thinking that if there had been more consequences for certain people’s actions in the past decade or so, we wouldn’t have quite so many angry, frustrated and disillusioned people.”

We can think of what is happening in one part of the world as an isolated occurrence but we are all in this together and this is holds even more true for European countries, whether they are located on the continent or on an island separated by water. It is not yet too late to find a solution based on togetherness not on separation.

“Broken Ship” could easily stand on its own thanks to the artfully compelling visuals but AKIVA clearly want more than only entertain with their music. By releasing a lyric video, the band leaves no room for incorrect interpretation or misunderstanding. AKIVA in their own words:

“We’ve always believed music should stand for something and carry a message. There’s a lot to shout about in the world today, and we’ve got a lot to say.”

Looks like the protest singers of the past got joined by a new crop of cool indie rock bands with an equally intellectual approach and skills to back it all up and so we are truly excited to premiere the compelling lyric video “Broken Ship”:

Connect with AKIVA on Facebook and Twitter. Listen to “Broken Ship” and add the track to your playlist: