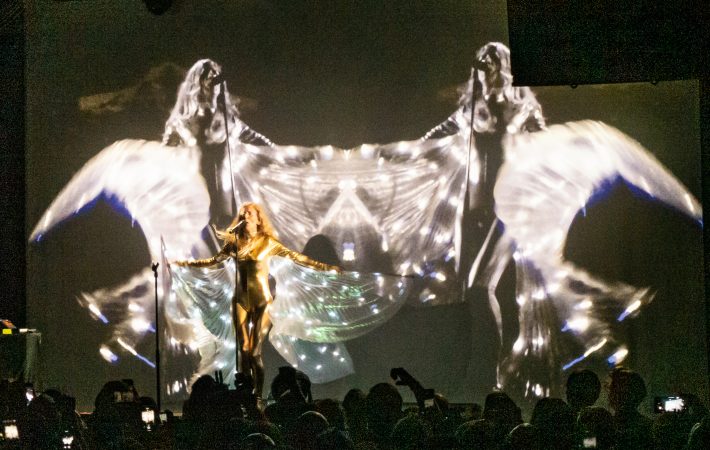 Jonna Lee aka ionnalee fka iamamiwhoami has always been more than a musician. Whatever the Swedish artist does feels like part of a larger concept: the music, the visuals and even her own appearance are to be full of symbols and mysterious references. This was clear from the first moment in 2009 when a series of videos, first released anonymously, grabbed the attention of music fans worldwide. Since then, Jonna has become a darling of the indie pop scene and draws a big following wherever she appears. From 2017 on she has released music under the name ionnalee, but that does not stop her from playing iamamiwhoami material at her shows.
We saw Jonna live the first time in 2013 at the Brooklyn Masonic Temple, where she appeared with a full band. This time, at Elsewhere’s 750-capacity Hall, she brought fewer people to her show: the music was done by one person on a small laptop rig and the visual effects were live-generated on a giant screen behind Jonna. But frankly, she does not need much help on stage: dressed in a tight golden bodysuit plus a few simple, but effective accessories, it was hard to take the eyes off her.
And then there was the stage dive when Jonna let herself be carried by the audience through the room. It was the first one she has ever done and New Yorkers can take this as a compliment. What an amazing and truly memorable event!
ionnalee has a few more dates in May throughout the U.S. and then heads to Europe in fall.