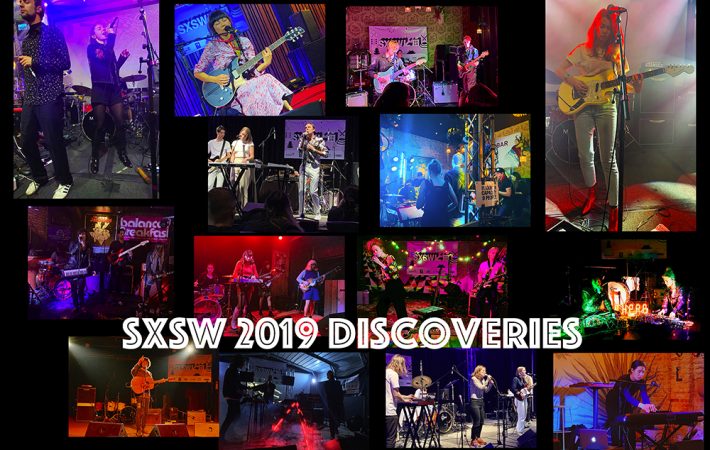 The most exciting and memorable SXSW moments happen when you least expect them; when you are blown away by a new act that you didn’t know before, or by arriving a bit too early to see somebody you had on your must-see list and see someone else instead. Or maybe you intended to see a specific act but then their show takes a  different turn and becomes so much better than you anticipated. This time around, we had several of these discoveries and want to share them with you. This is somewhat the chronological order as our discoveries went:

Sometimes you have to change your surroundings in order to appreciate what you have at home. This holds especially true during SXSW when there is time to enjoy the one or the other New York-based act in a different context, outside the same-old venues and setups. This especially came true with  Brooklyn-via-Madrid artist Sandy Davis, who goes by the artist name pecas. Having been at Cheerup Charlie’s early and gotten a front row space, I was mesmerized by pecas, who sang, played bass and grooved to her sound, performing her latest songs. When I dub her “the female answer to Alex Cameron” I mean it with all my heart and affection, and not just because of her moves or because she had a saxophone playing sidekick with her on stage. Next stop, a venue close to home because pecas is among the ones to watch. Closely!

Listen to “T-Shirt” on Spotify

Having song picked the New Jersey-born and raised artist earlier this year, we definitely wanted to see the now LA-based singer/songwriter live and holy cow, did he deliver! While Adam Melchor‘s own songs are beautiful song pearls, his performance show stopper came with The Beatles’ classic “A Day In The Life” which he interpreted in a spectacular way. Hope to experience this all soon again!

Listen to “I Don’t Wanna See You Cryin’ Anymore” on Spotify.

THERE live @ The Townsend

As someone who tries to listen to as many SXSW announced artists as possible, I came across THERE before they made a splash via NPR’s Austin 100 and loved them from the spot! Naturally, I went to The Parish, where Sivan Levy and Yael Enosh performed their first official SXSW show as part of Kosha Dillz Oy Vey showcase. Having been totally mesmerized and utterly charmed by the indie electronic duo, it was a no brainer to also attend their second official showcase at The Townsend which was packed to the rim and had everybody in attendance at awe. As of now, there is only one single released but expect an EP or even an album to drop soon as the two have a lot of fantastic music in the bag. Sivan’s sultry vocals and Yael’s mastery on the keys and their common dark and mysterious artistry make for an unforgettable time for many of your senses.

Listen to “Swimming Backwards” on Spotify.

This is why you go to SXSW, to have experiences that are not easily to be replicated in the usual touring circuit. Case in point: Munich-based 15+ member live techno band Jazzrausch Bigband. Now, here at glamglare, we generally believe less is more and are not easily swept away by a packed stage, but in this case it totally worked and the energy in the room was palpable.

Listen to “Dancing Wittgenstein” on Spotify.

We first encountered Arabella Rauch, who goes by Josin, in Reykjavik for Iceland Airwaves 2016. Back then, her music was already appealing yet what she does now sets her apart from the crop of electronic musicians. Having discovered her head voice (as Arabella told us in a lovely chat after the show) and with it a range of new possibilities, Josin enchants an attentive audience who didn’t hesitate to sit down on the cold, naked floor of the venue to listen in awe. Beautiful! Hopefully, we can welcome Josin in New York soon.

Listen to “In The Blank Space” on Spotify.

The British Music Embassy at Latitude 30 is one of the finest venues in Austin during SXSW – if you get in, because lines are guaranteed here. How lucky we were – with perfect timing– when we could just walk in to see Hælos for an awesome show. But even better, right after them Minke was on, who convinced with great songwriting, an unpretentious stage persona and and a way to break into effortless, skillful guitar solos whenever they fit into a song. We hope she will use our custom glamglare picks in future shows.

Listen to “Something Better” on Spotify.

The two stages at the Austin Convention Center are somewhat of an insider’s tip at SXSW. Not only do they have excellent programming, but there it is also completely ok to sit in one of the comfy chairs and catch some dearly needed breath during the festival. When a band like Lowly, a Danish five-piece plays there, you can let yourself get lost in the beauty of the music and the bliss is perfect. Lowly will release a new album “Hifalutin” on Bella Union later this year.

Listen to “stephen” on Spotify.

Without knowing what to expect, we hang out at the M for Montreal showcase with a three piece taking the stage. Hey, never wrong me in book. What this Toronto-based trio put on stage blew my mind! Not only were they surprising their audience with an interesting stage performance but also intelligent industrial post rock to back up the visuals. I would definitely want to see a full set show of Odonis Odonis.

Listen to “Check My Profile” on Spotify.

We also greatly enjoyed the performances of the acts we have featured in The Music Preview Guide to SXSW 2019 aka The Pantones, I Know Leopard, Steady Holiday and Eliza Shaddad (glamglare showcase review to follow), or on glamglare before like Annabel Allum, The Cuckoos and HÆLOS. And there were many more great discoveries but too many to feature them all.

The Cuckoos @ The Jackalope

=== All photos by Elke Nominikat and Oliver Bouchard – iPhone only ===