See you at the New Colossus Festival 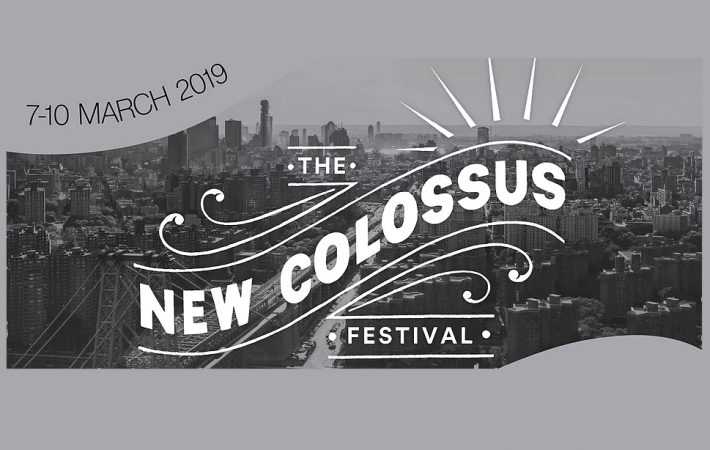 See you at the New Colossus Festival

Whenever I meet New Yorkers, those who are either born here in the 70s and or earlier or have been living in the city for more than my eighteen, going on nineteen years, they mourn the times when Manhattan was a true musician community. In the 80s or so. Mind you, they whine that Manhattan has lost its scene, while on the other side of the (East) River a whole new community emerged.That tight knit cluster of Brooklyn bands aside, if you look carefully -and you don’t even need a looking glass for that because it is obvious- new support systems or ambitious endeavors have emerged and the latest one is the New Colossus Festival

By calling it simply a new music festival founded by Mike Bell (Lorimer Beacon), Lio Kanine (Kanine Records) and Steven Matrick (Kepler Events),  I would gloss over all the many, many details such a new venture entails. As someone who curates regular showcases, I know how many countless hours and work goes into a single showcase with four to six (international) acts and have a faint idea what this multiplied might be like. However, doing this on the scale of a brand new music festival? I feel for the three music-lovers and their certainly sleepless nights and way too many coffees and nail-biting moments.

I can very much relate to the inspiration for the event, when the founding trio states:

“The whole concept behind this Festival is to celebrate New York City’s historically welcoming spirit. Emma Lazarus’ 1883 sonnet, “The New Colossus” featured on The Statue of Liberty is a message to the world that expresses this sentiment perfectly.”

What a major accomplishment! Once it is all booked and done and put in print and online the live magic can happen in the heart of the Lower East Side’s most beloved independent (yes, they are still around!) venues like Pianos, The Delancey, Arlene’s Grocery, Bowery Electric, Berlin and Coney Island Baby. And there’s more: places who sell records are on board too like Rough Trade with their shop in… just a little bit over the Williamsburg Bridge.

To find out more about the festival, all who made it happen and the many fantastic bands you can see over the next five days, click here:

A five day badge is a mere fifty dollars and lets you float between venues and musical styles. (Individual show tickets are available too.) Oh, did we mention the cool afternoon sessions at Pianos and Arlene’s yet? Check the schedule here.

and of course many, many more. Surprises are always welcomed, especially during a music festival! Check out the full lineup here.