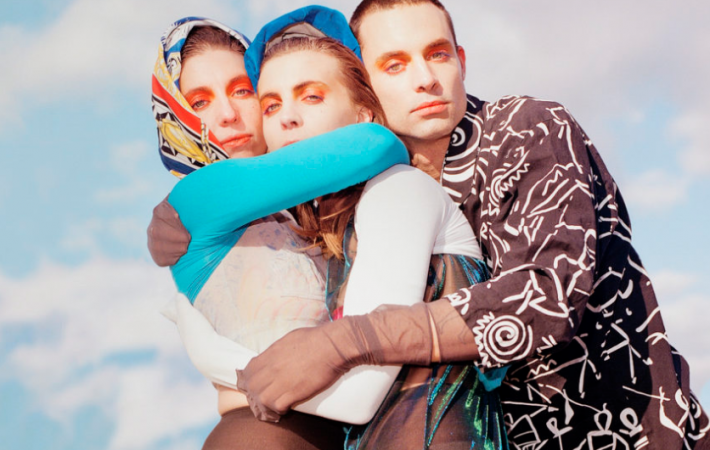 Without even listening to the end of “General Hum”, I already started to create today’s #glamglarepick feature because I am a huge fan of Toronto-based sibling-trio Doomsquad. With “General Hum” they not only released yet another fantastic electro-psych single but also an electrifying video, directed by Zak Tatham. Both promote the upcoming album “Let Yourself Be Seen”, out on May 10 via Bella Union.

“We wanted to expand further on the idea of a post-identity hybrid-corporeality sense of oneness which we allude to in the album cover photo, and is mutually experienced by many in the nocturnal hours on a dance floor. Riffing on the source of much of our creative power: our siblinghood, and seeing how we could push that creative power further, we envisioned a state where we could go beyond the liminalities imposed by our bodies, genders, and senses of self. This state, or future form, (actually its quite archaic) is a merging of our beings into an all-powerful super body. It’s bare and vulnerable, with its mechanisms exposed for all to see, yet is perfectly suited for the world today; in its multi-faceted communal nature, it’s strong enough to take on all forces. Let Yourself Be Seen!”

Doomsquad’s new single and video are certainly intellectually ambitious yet also thanks to the overall mesmerizing vibe also accessible and simply gorgeous. Can not wait to hear this and other Doomsquad tracks live at this year’s SXSW2019, where they are scheduled to play a few shows. Listen to “General Hum”, our Song Pick of the Day:

Watch the compelling video for “The General Hum”: