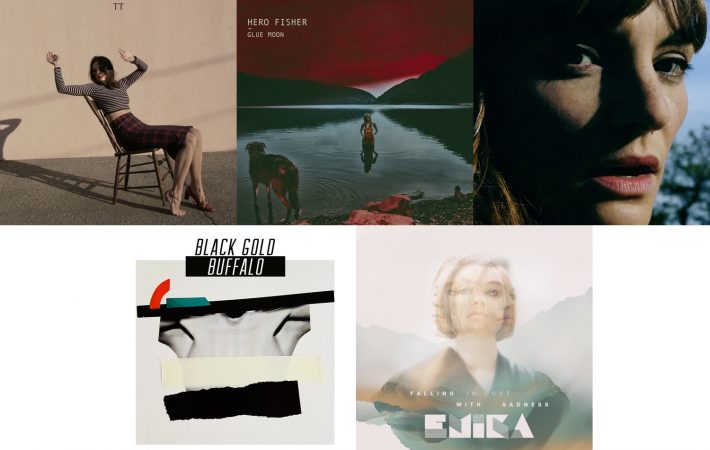 2018 is in the rearview and after all best-of-the-year lists have been published, we are looking forward to what kind of new music 2019 will bring us. But why not have a look back to what you might have missed last year? Music does not age that fast, a good album in 2018 is still good in 2019. So while you are waiting for your next favorite record, here are five albums released last year that are definitively worth to be added to your library.

Theresa Wayman is best known as a singer and guitarist in Warpaint, which I believe is – I’m serious here – currently the best rock band on the planet. With that background, Theresa has an excellent starting point from where she can explore other musical influences, most notably 90s-style trip-hop. The result is an album with ten intimate and diverse songs that are best savored in sequence. (Apple Music)

If you followed glamglare for the last couple of years, you probably noticed we presented quite a few Hero Fisher songs. All those and a few more can now be found on her second album “Glue Moon”, released late last year. The record sports 13 tracks with so much intensity and cinematic drama that it is easy to overlook what a fantastic singer Hero Fisher is, who surprises with vocal expression and range around every corner. (Apple Music)

Halo Maud lives in Paris but she sings in English and French, and uses both languages effectively for different expressions in her music: “When I sing in English, the words float away from me straight away,” she explains. “When I sing in French, I feel something different, something more immediate, and I think the audiences do too.”. The songs on “Je Suis Une Île” are bright, melodic pop songs with a delicious dose of weirdness, something that Björk’s music could have evolved to, if she wasn’t so driven to push new boundaries with every record. (Apple Music)

All of the above are albums more on the reflective side, music that can take you to different worlds, but if you want to dance, “Black Gold Buffalo” is the record for you. The quartet from London develops their music around groovy bass lines, percussion-driven beats, sharp guitars and singer Keziah Stillwell’s intense vocal delivery. And live on stage they are even better! (Apple Music)

Emika – Falling In Love With Sadness

When Emika released her first self-titled album in 2011 it was a thrilling exercise of forging accessible pop music out of cutting edge electronic dance music. With “Falling In Love With Sadness”– her fourth electronic record with the classical “Melanfonie” released in between – she has in a way created her own genre with songs that effortlessly traverse electronic influences and serve as a rich backdrop to her expressive, beautiful vocals. (Apple Music)