Four Days of Networking, Inspiration and Music at Mondo.NYC 2018 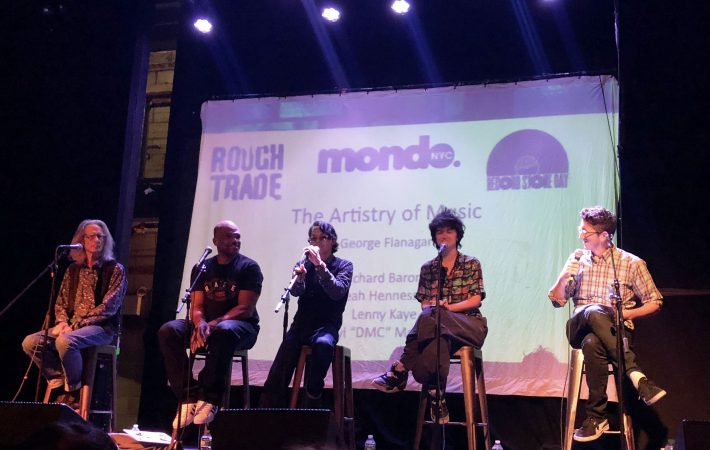 Four Days of Networking, Inspiration and Music at Mondo.NYC 2018

After weeks of anticipation, even the best of times come to an end and so the music and technology festival and conference Mondo.NYC wrapped up its third year yet has already announced its return for next year. Mark the date, October 15 to 18 and check their website for updates to follow as early as next month!

While we focused on networking and seeing bands play live, we also made it to some of the excellent daytime programming with Your DIY Toolbox To Effectively Market Your Music, Guild of Music Supervisors: Ad Agencies & The In-House Music Supervisor/Producer and The Artistry in Music being our top three favorites. The latter of course, as star studded as it was, turned out to be a special treat.

The panelists were Lenny Kaye, Darryl “DMC” McDaniels, Richard Barone and Leah Hennessey and all four of them including their host/moderator George Flannagan (manager of Rough Trade Records in Brooklyn) were incredibly interesting and charming. For me, they did the panel’s topic justice and put artistry front and center, and didn’t shy away to tell interesting stories and inspire in big amounts. Bravo! More like this please!

In our pre-coverage we anticipated a flurry of bands and sadly it is impossible to see everybody we would have wanted to see. Over the course of four days though, and this being New York City with lots of temptations, we caught the live shows of some of our local favorites like New Myths, GIRL SKIN, Gabrielle Marlena, åMBe and Mars Motel.

But Mondo.NYC being an industry festival, showcasing international acts who normally would not or no longer play the smaller venues, we were excited to having seen joyful pop rockers Kingswood from Australia (now touring in Europen), singer/songwriter Little Wise, also from Australia, jangly indie rock quintet Brass Phantoms from Ireland, garage pop quartet Casper Skulls from Canada and from the same country Karimah, who played a powerful and empowering solo set, as well as enchanting Elinda from Sweden. Or from not so far abroad, although the West Coast sometimes feels that way, King Daniel.

Each and every act was amazing and we are happy to have seen them live. Some for the first time, and others on repeat.

To get an idea of the festival, browse our photo gallery and stay tuned for Mondo.NYC 2019 to inspire and ignite again.