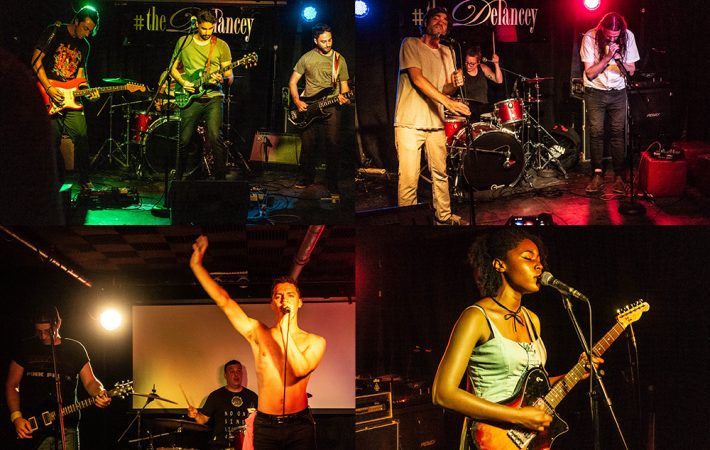 Our August showcase brought together a fabulous set of of indie rock music at The Delancey. We could not have been more excited to finally welcome Jummy Aremu aka War Violet to the glamglare stage. We have been following Jummy’s musical journey since her first demos and seeing her on stage for her intimate solo performance was mind-boggling.

The next band, glam rockers Deitre brought a drastic change of pace. The quartet around singer Richie Bee forges high-energy music out of several inspirations from rock history. Their show was a great antidote to the often chilly A/C at the Delancey.

With no sign of slowing down, we were excited to present trash pop three-piece Kid Midnight for the second time. It’s hard to not be affected by the onslaught of frantic beats, samples or their crazy good live show and sound. Let’s do this again soon!

Closing out the night was Mars Motel, the indie rock trio led by singer and songwriter Sarik Kumar. For this particular show, they gave us a taste of the upcoming album, playing mostly new material. Mars Motel become better and tighter with every show and feel comfortable enough to enchant the audience with epic jams.

Check out photos from all four acts below:

All concert photos by glamglare.com – © 2018 Elke Nominikat and Oliver Bouchard