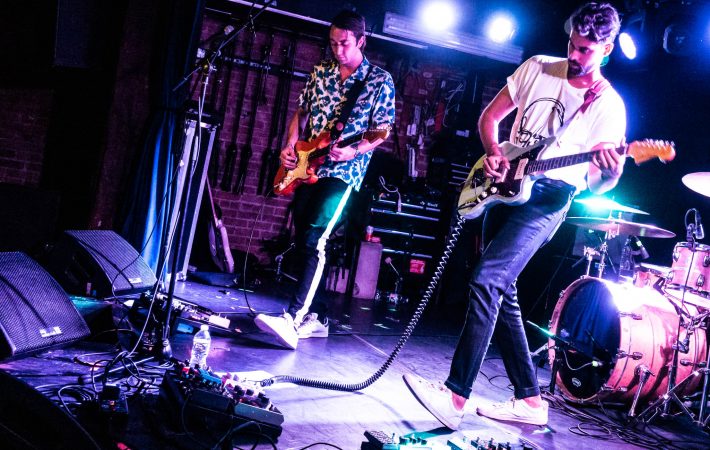 Approaching Mercury Lounge on a recent Thursday night, I see a long line of people waiting patiently to get inside the club. No surprise here, since two exciting New York-based bands were about to perform at the longstanding Lower East Side venue.

First up were Mayve, a pop rock trio from Long Island, who were part of last year’s December glamglare party. Mayve know how to create catchy pop-songs and got the audience going.

When Sarik Kumar and his Mars Motel band mates took the stage, they had their fans on their finger tips. Wes Wynne on guitar, Justin Lieberthal on bass and Craig Stauber on drums were ready to entertain and to play a full one hour set, which emerging acts so rarely get the opportunity to do – or not all have enough material that they can perform in high form for over one hour.

Not a problem for Mars Motel! Sarik and Wes seem to feed from each others guitar playing energy and together with their mates create moments of incredible dream rock bliss. Highlights of a Mars Motel show are the enigmatic “The Enemy” and the epic “America The Machine”.

Mars Motel’s charismatic frontman used to hone his craft as the lead guitarist in dream-pop trio Twin Wave and goes now slightly rockier yet still melodic ways with Mars Motel. No two Mars Motel shows are alike because this is indie rock alive and kicking!

== All concert photos by glamglare.com – © 2018 Elke Nominikat and Oliver Bouchard ==

Check out more of Mars Motel on Spotify or SoundCloud: