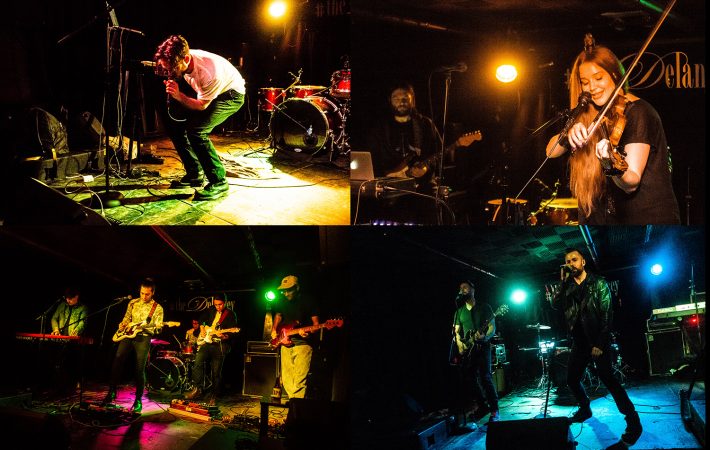 Every glamglare showcase is different yet all are bursting with emerging and ambitious talent, and our May party was no exception.

First up were Council, a synth rock trio comprised of identical twin brothers Doug and Pat Reeves, and their younger brother Andy Reeves. While we’ve featured Council before, they made a splash at this year’s Winter Olympics when their single “Rust To Gold” got selected as one of the official songs. Way to go! Was a special treat to hearing it live again.

Then it got more dreamy and mellow with Plastic Waves, originally founded in Boston, but now New York-based. Ever since we saw Andre Bellido and his band mates play at SXSW 2016, we were fans and they agreed to play our very first glamglare presents show back then for Northside 2016 at Knitting Factory. Fast forward, this was the second and certainly not last time that we featured Plastic Waves – a feast for eyes and ears.

åMBe had made herself rare, composing and producing new songs, releasing new music and like on the fly also winning for her 2017 EP “Enemy to the People” at the 16th Independent Music Awards. Bravo! Super psyched to having welcomed Maria Brodskaya and her band mate, the Grammy winning producer Brian Forbes, back on stage at The Delancey.

Having had a trio, a quintet and a duo that night, a solo act was maybe missing and Harris Mac filled that void, and he filled it well! While only equipped with a small keyboard and his laptop, Harris had some cool surprises up his sleeve and made the stunned audience gasp at times. Great music and show!

To get an idea what the evening looked like, browse through the photo gallery and come out to the next glamglare presents on June 22nd, and also mark your calendars for July 25th when Taylor Hicks et al of Plastic Waves perform with their instrumental post-rock band I/O.

All concert photos by glamglare.com – © 2017 Elke Nominikat and Oliver Bouchard