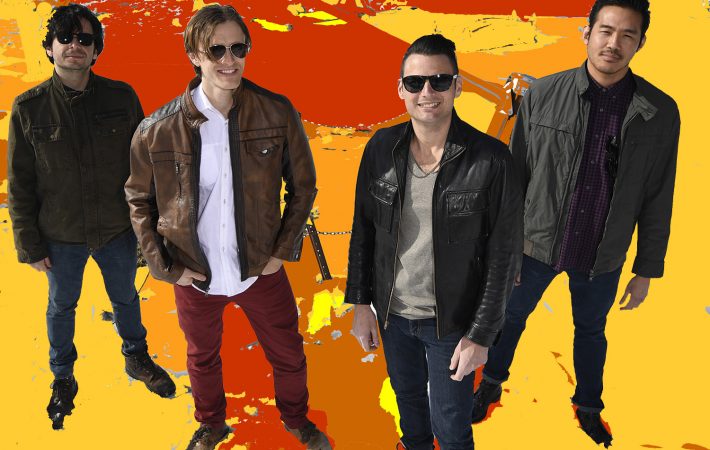 Strawberries are a universally beloved fruit, why else would we find the flavor almost everywhere from yoghurt and ice cream to toothpaste and lipgloss? What about “Strawberry Kisses”? Sounds appealing, doesn’t it?

Like the slight tartness of the fruit helps the inherent sweetness to shine through and making it last, the song “Strawberry Kisses” features an irresistibly catchy hook over pensive lyrics dealing with a variety of feelings, brought together by an overall buoyant vibe that lingers. “Strawberry Kisses” is the brand new single by Brooklyn-based quartet The Sleeping Tongues, and we are excited to premiere the beautifully bubbly track today.

Behind The Sleeping Tongues are singer, songwriter, producer, and multi-instrumentalist Craig Kepen and drummer Alex Chung, who formed the band. They get completed by Chris “Fatcat” (guitar, bass) and Evan Ignatz (keybord, bass), and delight audiences with their joyful, high energy indie rock performances.

Growing up in an aviation family from the midwest, the band’s music is heavily influenced by Kepen’s experiences as a pilot, who says about his songwriting:

“Regularly viewing the world from the cockpit of an airplane makes it very apparent how tiny, funny, similar, and interesting we all are. It changed my perspective and led me to adopt a more analytical approach to songwriting and lyrics. Even when drawing on my own experiences, I tend to also think about how an alien or anonymous objective observer would interpret my own actions and feelings. I think it’s more interesting to write that way and allows you to approach things with a wider perspective. You can be more universal than you can when only focusing on your own subjective feelings and perspective.”

This sounds like there are many more stories waiting to be told and songs to be created, and an EP to be released later this year. For now, there is the alluringly cheerful “Strawberry Kisses”, our Song Pick of the Day and exclusive premiere: