PHOTOS: Rich Aucoin Live at Elsewhere Zone One and his #PressOn Tour 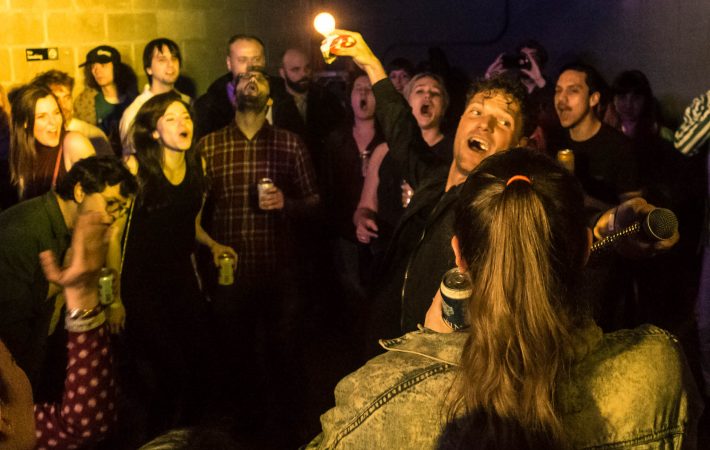 PHOTOS: Rich Aucoin Live at Elsewhere Zone One and his #PressOn Tour

Attending a live show of Nova Scotia-based musician Rich Aucoin is not simply “attending” a concert, with clear set boundaries like stage and ground floor, or artist and audience. It is experiencing a spectacle and that does not even describe what is really going on during one of Rich Aucoin’s live events. Let’s call it ‘event’ because that evening at Brooklyn’s Elsewhere end of February is highly memorable, unforgettable even.

His upcoming shows under the name PRESS ON will be even more exuberant, because of how they are set up. Instead of a classic tour, Rich Aucoin is bicycling from city to city, raising awareness for mental health by donating 100% of his tour proceeds to Mental Health America and The Canadian Mental Health Association. And in each city, fans can expect what those of us in Brooklyn witnessed, an outburst of life-affirming performance and joy-de-vivre.

The #PressOn tour officially kicked off on March 23rd in Los Angeles, and will conclude on June 30th in New York. Fans who are unable to attend are encouraged to donate to Aucoin’s crowdrise campaign.

Our photos provide only a tiny glimpse into a Rich Aucoin live event. His music is highly irresistible, there are video projections, there is confetti and there is a giant parachute but there might be much more at the live show you could go to. Check out the dates and have a fantastically joyous time!

All concert photos by glamglare.com – © 2018 Elke Nominikat and Oliver Bouchard

Listen to a Rich Aucoin classic, that makes you chime in with in times like this I wanna be a believer – “Want To Belive”: