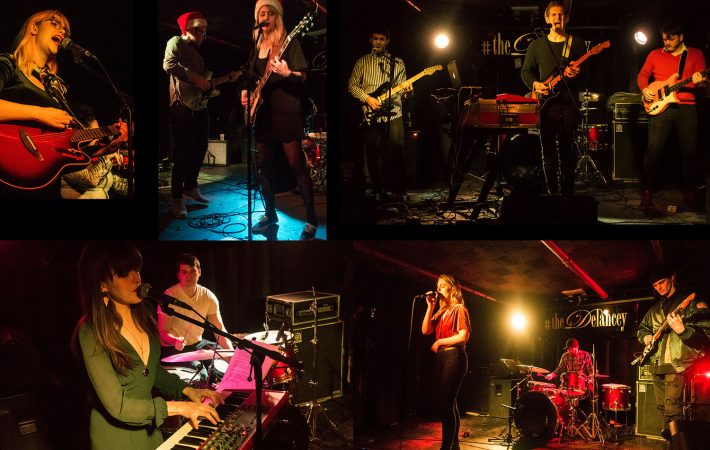 For us at glamglare 2017 went out with a bang, thanks to five amazing acts who agreed to play our holiday showcase at The Delancey on December 8.

Opening the night was Marie Lang, who we met at SXSW 2016 and who is going solo now, on stage accompanied by a guitarist and a drummer. It was the first show under her own name, which was fantastic, and she is currently working on new material.

Next up, glamglare favorite singer/songwriter Ariah &, who was accompanied by an acoustic guitar and a violin. Ariah’s catchy songs work well under different instrumentations and of course she played THAT special holiday song of hers – don’t miss it in the 2018 season!

For the second time on the glamglare stage was Jenny Judge, one half of the duo Cameo Bell. Together with a guitarist and a drummer, she captured the audience with her intelligent pop music.

Indie rock duo Centaurus picked up on the seasonal theme and brought cookies for the audience and Santa hats for their performance. We’ve had listened to their latest EP “One By One” (Apple Music | Spotify) many times and were thrilled to have them play our show.

Closing out the night was indie quartet Mayve, who sent us home in the best holiday mood with their melodic, upbeat pop songs.

Thanks everybody for coming out and to an amazing 2018!

Check out photos from all five acts:

Hear the music on our SoundCloud playlist: