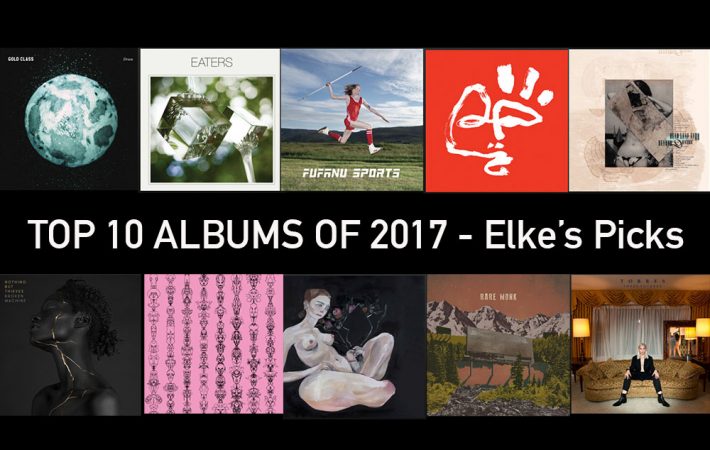 While our focus at glamglare tends to be more on songs and videos, I absolutely love to listen to an entire album. For an album to make my Top 10 List, it would need to pull me in with the opening track and hold my attention until the last one. Most of the albums here I’ve been listening a good two dozen times, became my go-to-music and wonderful companions.

I also wanted to make sure though to not miss out on some of the albums bigger publications were raving about and listened to many indie rock and pop albums like the ones from Japanese Breakfast, Fever Ray, Big Thief, Aldous Harding, and more but also to 2017 released albums of super groups like The Killers, Cut Copy or The National.

For me, it boils down to these ten albums though and if you are into similar music like me, please give these albums a try. Spotify is just a click away and the videos are often from the maybe most alluring song of each album.

Get a taste for these albums and listen to my two songs each playlist on Spotify.

In a vocals, guitar, bass and drums set-up without synths or other fancy additions, every instrument counts. And while the driving , energetic beats of Logan Gibson, bass by Jon Shub and guitar by Evan James Purdey, the vocals are maybe the strongest asset because Adam Curley‘s baritone is strikingly unique, fierce and powerful yet also tender when needed. “Drum” is the logic follow-up to debut album “It’s You”. It is definitely not one of the sophomore albums where all the stellar material landed on the debut and the leftovers make it onto the second album. These are all new songs, addressing lots of socially highly relevant topics and concerns. I’ve seen Gold Class twice last year, and also had a chance to chat with all band members both times. To learn more about the band and their music, check out this great interview  with Adam Curley by Nick Buckley.

Listen to “Drum” on Spotify.

Ever since I saw Eaters live in Summer 2016, I am a fan. Back then multi-instrumentalist Bob Jones and sound engineer/producer Jonathan Schenke told me about their upcoming album and I couldn’t wait to finally listen to it. And have been doing so since May. For fans of music with a lot of synths and electronic but also guitar, smartly put together to something really appealing.

No video for Eaters but awesome sound, still:

“Sports” by Iceland trio Fufanu is one of the albums I was really looking forward to and for the first half of 2017, it looked like it would top my list. It’s a gritty, electronic album with some stand-out tracks like the title track “Sports”, my favorite “Liability” or “Bad Rockets”.

For “Priestess” alone, this would be one of my favorite albums. Turns out, there are more jewels where this gem came from. The quartet put a lively show on this year at Baby’s All Right and here’s to hopefully seeing them again in 2018!

Stream “The Witch” on Spotify

Live show after live show, fans were introduced to most of the tracks of “Beyond.Desire”. The build-up to finally being able to listen to all the layered, often surprisingly noisy, yet super melodic songs from A to Z at home or on headphones while out and about became well, a desire. As usual for Dead Leaf Echo, the album is beautifully packaged, put together and produced with great care.

6 – Nothing But Thieves – Broken Machine

Earlier this year, Nothing But Thieves released “Amsterdam” and then subsequently rather quickly “Sorry”, “I’m Not Made By Design” and “Broken Machine” and then it dawned on me, that the album could be a good one. And yes, it is. While I can hear that the band being influenced by Radiohead (and at times The Killers too), I can only applaud them for their choices. The guitar and drum work is stellar and Connor Mason’s vocals are superb!

7 – A Victim Of Society – Freaktown

For fans of fuzzy psychedelic rock with super cool rhythms and beats “Freaktown” is exactly the perfect album! One of the few I also featured on glamglare before.

8 – Methyl Ethel – Everything is Forgotten

If asked to name only one song as my favorite single of 2017, then without a doubt it would be “Ubu”. I have listened to the track on repeat countless times and while I totally dig the entire album, I am looking forward to more gems like “Ubu”.

Listen to “Everything Is Forgotten” on Spotify.

“A Future” is beautifully intricate guitar driven indie rock, with an almost meditative flow. And while putting together this Top 10 list, the coincidence of having two albums with “future” in it, strikes me as pretty awesome!

Stream “A Future” on Spotify.

Mackenzie Scott who makes music as TORRES, released her third full length album on her new label, the prestigious 4AD and luckily only slightly changed her sound. She is definitely bolder and more confident in her musician skin. She also plucks from more music choices like giving some of her songs a more electronic feel or expressing herself more explicitly than before, as especially evident  in her music videos.

Listen to my two-songs-each playlist on Spotify: