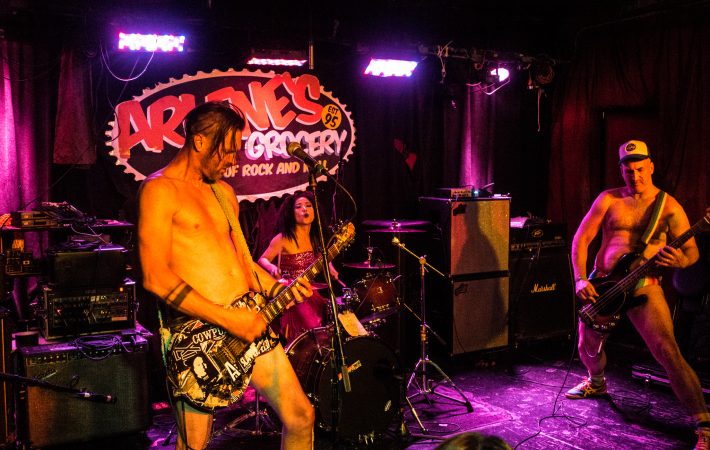 It started out very romantic, how we happen to know about Statues of Liberty and became avid fans in the process: in the summer of 2007, we were invited to celebrate the wedding of a friend in Upstate New York. Said friend, a musician, married another musician and the festivities were held at a large private ground with many other musicians in attendance. To make things even better, a yearly festival was hosted there too, with New York bands playing on two (!) stages in turns.

The host of this all was John Law, singer and guitarist of Statues of Liberty, who we saw live for the first time a couple of weeks later, at the now defunct Trash Bar if I remember correctly. Fast forward, we’ve seen Statues of Liberty many more times and then not anymore because John, Hitomi  Nakamura (drums, vocals) and Prince Hal (bass, vocals) pursued other projects and their common musical project had to simmer on the back burner.

If last Saturday’s show at Arlene’s Grocery though is any indication, the three are back and ready to take the Tri-State area by storm! The Statues of Liberty’s rock songs with punk influences are as fun and joyful as ever, as the stage banter and their performance are fresh and beloved.

Next chance to see Statues of Liberty live in Manhattan is on December 15 at The Bowery Electric (tix) and then stay tuned for more. In the mean time, enjoy here some impressions from a fantastic live show not to be missed!