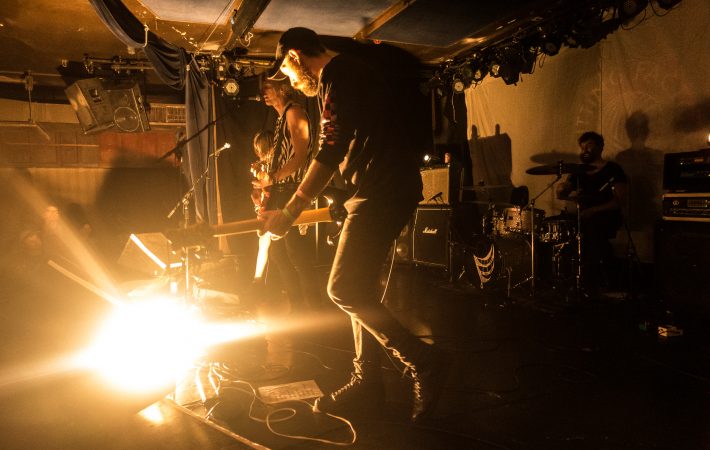 Today, I came across the posting of a musician friend who asked her friends/fans “of the bands/artists you’ve seen live, who put on the best show and why?” The conversations she had initiated on her ‘timeline’ were very well all about (super)stars shows like Björk or Depeche Mode and White Stripes. Cool. I am going to a lot of shows and only a fraction finds a mention on glamglare because… there’s not always something new to say, or the venue was too dark and the photos no good, or life simply came between the good intention and the actual execution.

What I should have contributed to that online conversation, that looking locally aka Brooklyn, there is no shortage of amazing bands who put on a great live show and Dead Leaf Echo is without a doubt leading the gang of fantastic live bands. Granted, playing an album release show is always a reason to celebrate and already elevates the event from “normal” to “special.” Having seen Dead Leaf Echo plenty of times live over the last several years, I can vouch for their allure: LG, Ana, Steve, and Kevin are as loud as they are melodic, as energetic as they are crafty and simply fascinating to watch live. They don’t rely on a venue’s light options but create their own effects, and they always infuse their shows with older and brand new material alike.

Check out some photos from Dead Leaf Echo’s album release show on October 13th and get “Beyond.Desire” in beautiful vinyl or CD here:

Stream the album on Spotify: