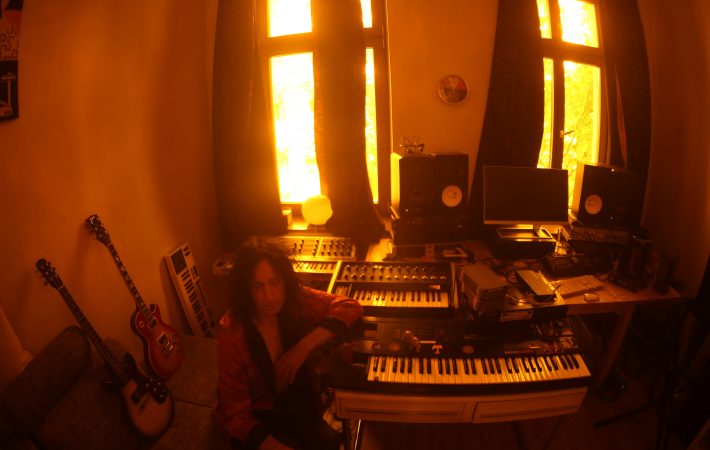 Filed Under: Excited About, Playlist — By: Oliver Bouchard

Gordon Raphael is best known having produced The Strokes’ first demos and their debut album “Is This It”.  The rest is history… He also produced the music of “this unkown Russian girl” Regina Spektor. Another huge success. In addition, Gordon Raphael worked with acts ranging from Damon Albarn, Ian Brown, the Cult’s Ian Astbury to Spanish act Hinds, along with countless smaller groups. Aside from his producer talent and huge accomplishments, Gordon Raphael sees himself foremost as a musician and songwriter:

“I love producing, but playing guitar and writing songs is what I’ve always done. I wanted to show what I can do on the other side of the desk all the time, but producing kept getting in the way.”

Eventually, Gordon Raphael focused on creating his very own music and the result are 12 fantastic songs all bundled on his debut solo album titled “I Sleep on the Radio”. We got a sneak-peak of the album already, which will be out on October 27th 2017. All 12 tracks on the record reflect a lifetime of listening to music and are particularly inspired by the glam rock and glam pop era.

Listen to the fab “I Sleep On The Radio”, with its groovy and irresistible vibe:

We are stoked to feature Gordon Raphael’s Top 10 Playlist, the inspiration for his own songwriting and musical expression, and his explanations and insights are stunnning! This is a playlist for true music lovers, to be revisited time and time again:

1) Jimi Hendrix – “All Along The Watchtower”

All Along The Watchtower: written by Dylan, done by Hendrix. Best and most innovative guitar tones and solos. A mood that can take you out into space while flying back and forth in time.

Stay by David Bowie: Just one of the most grooving and powerful songs ever, at the same time being utterly stylish and fashionable!

Dirt (Live from the TV Eye album) by Iggy Pop: Nasty, self harming, dangerous and revelatory. Its a killer band featuring the Sales Brothers, Ricky Gardiner with Bowie on keyboards.

Five Foot One by Iggy Pop: I just love this video. Who could do this but Iggy?? Who could get away with it??

Truly one of my favorite songs ever- got me thru so many emotional difficulties, and gave me countless visions of glamour, funny attitudes and the power of rock ‘n roll!

Sharleena by Frank Zappa- From his Chunga’s Revenge album, its a beautiful song and something in a very unusual style for Frank. Probably very nostalgic for him!

Eternity’s Breath Part 1. Mahavishnu Orchestra I play this for drummers all around the world, because it could inspire them and maybe blow their minds! Michael Narada Walden is the drummer, and the music is featuring John’s guitar and Jean Luc’s violin. Recorded by Ken Scott who worked excellently with Bowie and Beatles among others.

Hey Bulldog by The Beatles: What a riff, and if this doesn’t rock well, nothing does! From the album Yellow Submarine.

Reptilia by The Strokes: This video says it all: look at how they play this song. You can see exactly what each person is doing so clearly. Filmed by Roman Coppola. I remember watching them film this in the studio.

Waiting For the Sun by The Doors: Yes, this song and this track have influenced me so much, I can’t say enough good about it. I love the lyrics, Ray’s keyboards and the killer slide guitar by Robbie Krieger.

Mark your calendars: Gordon Raphael’s solo debut album “I Sleep on the Radio” will be out on October 27th 2017.