Q&A with Me Not You 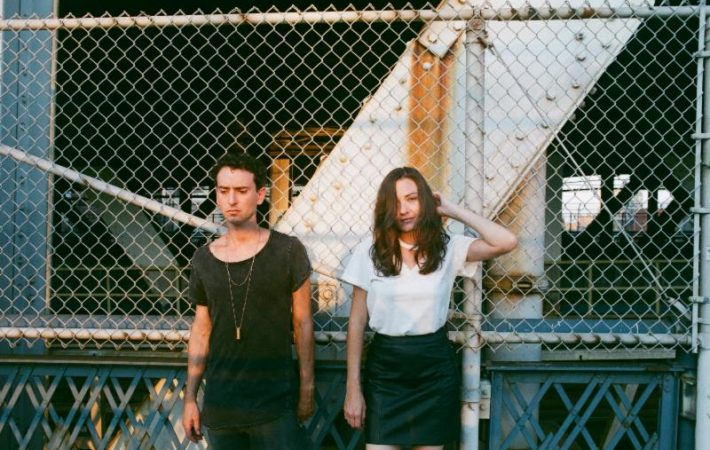 Q&A with Me Not You

There is no lack of female/male electronic duos these days, but New Yorkers Me Not You have a grittier approach to the genre as can be witnessed when listening to their single “Relief, that dropped early this year. Now they have released their six song debut EP “Reckoning 1” (Apple Music | Spotify) and go on tour with English synth pop legend Gary Numan.

Listen to “Bulletproof”, the opener of “Reckoning 1”:

Nikki and Eric were so nice to answer some questions for our Offstage Q&A series:

Q: What was the last song that got stuck in your head?
A: Eric: The War on Drugs’ “Holding On.” It’s been on the radio a lot in New York lately and the whole song, but specifically that 5-note descending glockenspiel part, has been perpetually glued to my brain. So simple, and so brilliant. My theory is that Adam wrote it after doing his cover of “Touch of Grey” for the National’s Grateful Dead compilation. There’s a similar kind of effortless simplicity and lightness to the two songs.

Q: Do you have a song from your childhood, one you always enjoy hearing again?
A: Eric: I never really got into Soundgarden, but whenever “Black Hole Sun” comes on the radio, I can’t turn it off. And that guitar sound… that’s become a staple for us. Can’t help but refer to it as the “Black Hole Sun sound.” I’m sure we’re not the only ones.

Q: What is your favorite Gary Numan song (don’t say “Cars”)?
A: Nikki: My favorite is probably his other big hit from that era, “Are Friends Electric.” But since booking the tour, I’ve been delving into his catalog, and there are fantastic songs on every album. Super stoked to get to see him play 27 times. I’m sure I’ll have a different favorite song by the end of the tour.

Q: What’s your songwriting process like? Are you working together in a room or developing different parts separately?
A: Nikki: Most of our songs start with both of us in the room together. Eric will start messing with a drum loop or a synth patch or something, and jam by himself while I’m playing guitar and singing stuff on the other side of the room. If he hears something that jumps out at him, he’ll tell me, and if he makes some magic, I’ll tell him to “HIT RECORD MAN!” He loves to not hit record, but I’m a big fan of that “record” button.

Once in awhile, I’ll bring in a sketch of a song or some lyric or melody idea and we’ll flesh it out together.

And even less frequently, we’ll sit somewhere with two acoustic guitars and write. That’s how “Julia” came about. But once we had the basic ideas written, we bolted back to the studio to lay down electric guitars and drums… we didn’t want it hanging around as a summery acoustic song for too long.

Q: If you could have any musical instrument in the world, which one would it be and why?
A: Nikki: There are lots of vintage synths on that list, but I’ve always really wanted a sitar. I played one years ago and even just messing around, everything you do sounds magical.

Q: Is there a song you’d like to cover?
A: Nikki: We’ve been talking about covering Elliot Smith’s “Speed Trials” for awhile now. It’s such a great song, and we think it would be cool to re-imagine it a little faster, grungier, and darker… really fun to cover. We still might do it.

Q: In your experience, is there any place with a better live music scene than New York?
A: Eric: Fuck no! It’s honestly overwhelming… sitting at home and feeling like, “What am I not doing out seeing music tonight?” The fomo is crippling! I read an interview recently with Laurie Anderson, and she said that Lou Reed used to make them go out in NYC every single night for the entirety of their relationship. That’s inspiring. NYC is a world unto itself, and it’d take many lifetimes to see, hear and eat all that it has to offer. (Oh, and yes… the live music scene is great!)

Q: If you could choose to live in a decade (music, style, etc.) which one would it be?
A: Eric: The twenty-teens, of course! Come on! How would we be able to live without the word “lit?”

But really… Nikki and I talk about this a lot, and I don’t think we’ve come to a consensus on what the best decade for music was. I lean towards the 80s. Though most of my favorite albums of all time come from the 70s and the 90s (Rumours and Dark Side and OK Computer and Loveless), the music of those two decades doesn’t seem as focused on progression and innovation. In the 80s it was a revolution. Electronic music and hip-hop came into their own, and pop music got so incredibly interesting. The clothes are amazing and ridiculous and everything seems soooo fun. So yeah, for me, it’s probably the 80s.

Thank you, Nikki and Eric for your time and for your inspiring answers! It’s great to know about fellow New York and 80s enthusiasts. Have a joyful and pleasant tour!