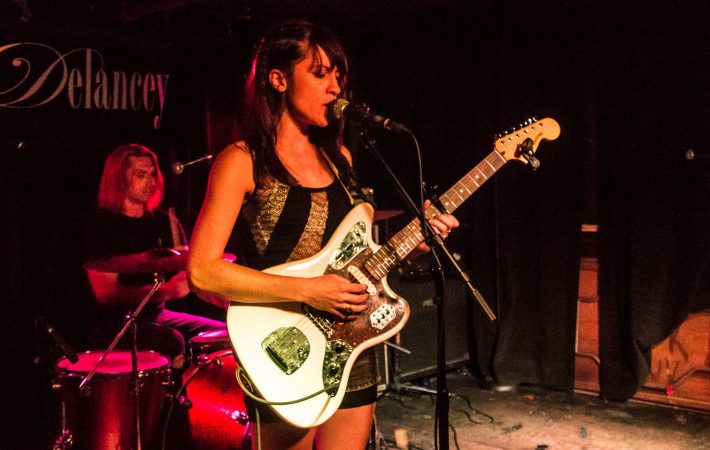 Opening the joyful evening were Ariah &, the musical project of Ariah Noetzel, who this time did not play all by herself but brought Andrew Widell (guitar, vocals) and Lena Gabrielle (vocals) with her to make her gorgeous songs come alive. Solo or with other musicians backing her, Ariah is always a pleasure to see live and we know, this is only the beginning…

Next up was Gillian Visco who goes by the stage name shadow monster, surprising old fans and new fans alike with her passionate performance. Comparisons with the White Stripes -just the other way around- came up and shadow monster’s set, albeit a full 45 minutes long, was over all too quickly. The new material is fantastic, the new video stunning, which we had the honor to premiere, and we can not wait to see shadow monster again any time soon. Gillian was accompanied by John Swanson on drums – super rad!

A concert becomes even better when there is something special to celebrate? A birthday maybe? Luckily, we could do exactly that and celebrate Jon Prezant‘s birthday together, although who was giving a present to whom? Jon Prezant’s optimistic and inspiring electro pop makes you want to chime in and start to dance. He certainly got the audience to party. He was supported by his drummer Matt Tatro and for three songs also by Jeffrey Prezant, aka his dad.

At the height of the party, GIRL SKIN took over the stage and closed the night in style. We had featured the soulful indie-folk band before, during our March and our Northside Festival showcase in June, and were curious how GIRL SKIN would sound when they play a stripped down acoustic set, with only piano (Bailey Blu), acoustic guitar (Sid Simons), bass (Alex Harwood) plus their intriguing vocals. Looks like GIRL SKIN can do no wrong, thanks to their solid songwriting and sincere as well as skillful performance and so they once again took the audience under their spell and cheering.

Leaving for the night, everyone in attendance agreed to having been part of an evening filled with beautiful music, performed by exciting musicians who are destined to make their ways!

Click on a thumbnail to browse through the gallery:

Our next showcase is on August, 18th at The Delancey. For more info, click HERE.

Listen to the songs of the performing artists and discover new favorites: