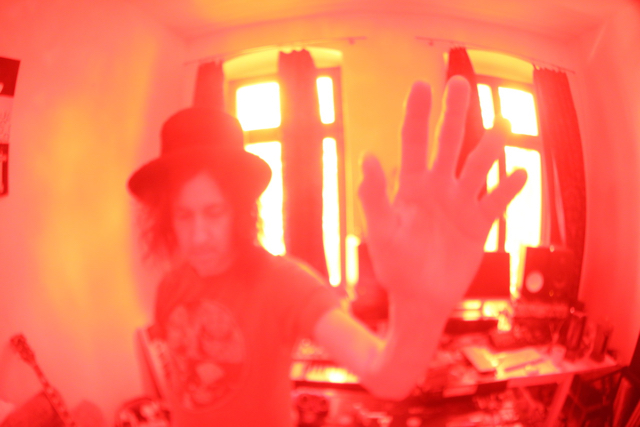 Don’t judge a book by its cover or a song by its title, but “View From Blue” – got me precisely at that! Even after listening to the guitar-driven track for the umpteenth time, the beautifully warm and fuzzy feeling doesn’t get old. It’s a bit like walking into your favorite neighborhood bar and getting offered your preferred drink even before ordering it.

Seems like Gordon Raphael was on a glam rock listening binge when creating “View From Blue,” but of course, it would not be the man who produced The Strokes’ and Regina Spektor’s superb first albums if he did not know how to mix that warm and fuzzy sound with something exciting, fresh and new. Gordon Raphael’s vocals lend the track depth and gravity. At the same time, the psychedelic bluesy guitar is let loose to flirt away. As someone who does not leave out an opportunity to mention how much she digs The Strokes, I can hardly express how flattered and honored I am to exclusively premiere the first song from Gordon Raphael’s upcoming album on glamglare. Holy cow!

But why would this successful and thought after producer go through the trouble and put out his own record? Here is what Gordon Raphael says:

I love producing, but playing guitar and writing songs is what I’ve always done. I wanted to show what I can do on the other side of the desk all the time but producing kept getting in the way.

“View From Blue” is just one of 12 fantastic songs on an album, that could have easily had multiple more tracks, as Gordon Raphael never stopped writing songs. These are the songs though that made the cut for the upcoming debut solo album Sleep On The Radio, with a release date of September 22, 2017, via Zero Hours Records.

For now, listen to the dazzling “View From Blue”, our Song Pick of the Day and exclusive premiere:

Connect with Gordon Raphael on Facebook, Twitter, and Instagram and add “View from Blue” to your playlist as we are adding it to our glamglarepick playlist on Spotify: