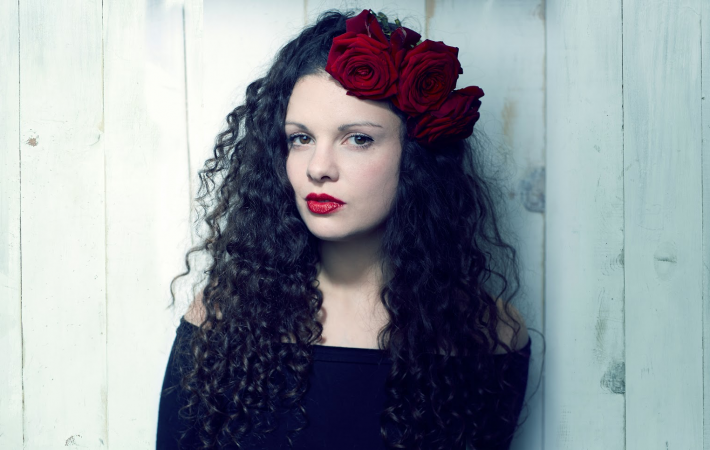 The London-based singer/songwriter Natalie Bouloudis has a way to transport you into a different world with her songs. Be it that she brings in influences of past decades or her beautifully expressive vocals or the stories she tells with her music, you can close your eyes and have a film play in your mind. Natalie has just released her six songs EP “Dead Sea Scripts” (Apple Music | Spotify) and she agreed to answer our Offstage Q & A:

Q: What was the last song that got stuck in your head?
A: ‘Paul’ by Big Thief, I have only just discovered the beautiful lyricism and voice of Adrienne Lenker and I can’t get enough of the whole band right now.

Q: Do you have a song from your childhood, one you always enjoy hearing again?
A: I seem to recollect my dad plying me this compilation which included ‘Please Mr Postman’ by The Marvelettes and ‘Baby Love’ by The Supremes. I still love both of these.

Q: Do you still possess this album?
A: I still have hundreds of my old CDs stored in my parents house and I’m sure it’s lurking in there somewhere.

Q: If you could directly support anybody – past or present – on tour, who would it be?
A: Wow that’s a really difficult one – I think it would have been a lot of fun being on the road with Janis Joplin and her band Big Brother & the Holding Company in the early days.

Q: What’s your songwriting process like? What comes first, melody or lyrics?
A: I don’t really have a set song-writing format. On most days I find myself writing down lines and little thoughts; some of those end up turning into lyrics. Sometimes I play around with my guitar and find a riff which works and the singing melody often emerges simultaneously. One way or another, when you are onto something it then all comes down to editing and perfecting the tune and words until I’m satisfied.

Q: If you could have any musical instrument in the world, which one would it be and why?
A: I’ve always fancied the idea of learning to play the harp and I would love to own an original Rhodes piano. But really I am a guitar player so a Gibson 1964 ES-345 in Cherry would be sweet.

Q: You often reference music of the past in your songs. What would be your favorite decade to live in and make music?
A: I’ve always had a strong affinity for the 60s. It just seemed like this magically times for music erupting from every direction with all the shades of rock, Girl groups, folk, funk, soul, jazz, R&B and psychedelic merging in all the forms and fusing at the seams.

Thank you, Natalie! Hundreds of CDs? Let’s get together and trade!