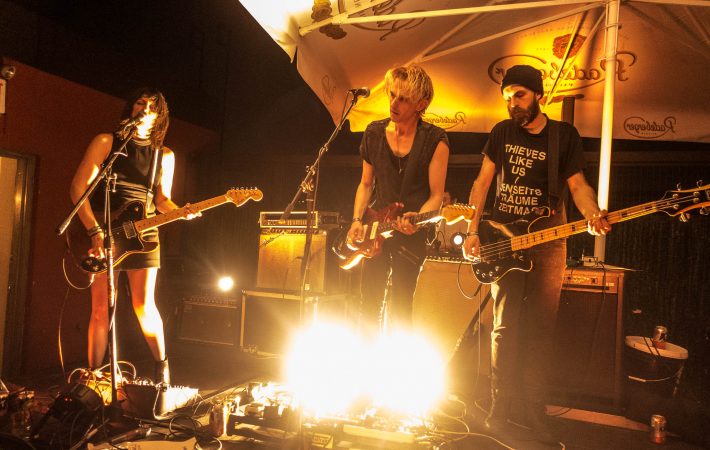 The innovation leg of Northside came to an end on Friday and we got a glimpse of it at the Happy Hour sponsored by the Dutch Consulate and a startup called membit, who demonstrated a super-cool augmented reality app to us. The first music of the day came from a salsa band at Kinfolk 90, where the official closing party took place with food and cocktails. As a fan of Buena Vista Social Club I enjoyed it a lot, even though they played mostly well known standards.
The biggest challenge for the music part of Northside is to compress the events sufficiently to create festival spirit. The big stage in McCarren Park is a good start, but how to set up smaller events for a special experience, one you cannot have any other weekend in New York City? One example for such an event happened on Friday night at Our Wicked Lady, where Wet Leather, Obliques and Dead Leaf Echo played a show case for Indie Shuffle and Paper Cup Records. The stage was set up on the rooftop overlooking an industrial area of Bushwick. Dead Leaf Echo even pulled an SXSW-style stunt by playing another gig earlier at Cape House across the street and managed to haul their entire gear up to the roof in an astonishing 20 minutes. I could imagine that making this area of Brooklyn more of a focal point for the festival helps making it grow.