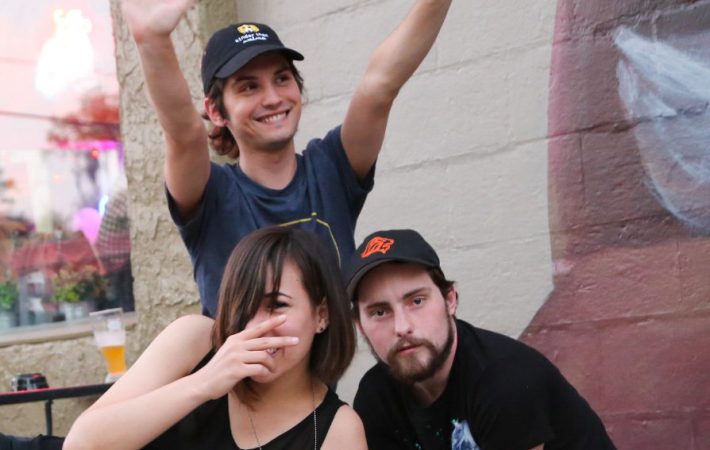 Filed Under: Northside, Q&A with... — By: Elke Nominikat

Consider us long time fans of Orlando-based three-piece Kinder Than Wolves because in January 2016, we featured the beautiful debut single “Hazel Days” as our Song Pick of the Day. A couple more features followed. Fast forward one year and six months, we are overjoyed to welcome Kinder Than Wolves as part of our AudioFemme x glamglare Northside Festival showcase – and not to be missed! To get into the groove of the festival spirit, we reached out to front woman Paige Coley and asked her Five Festival Questions:

1 – Q: How would you describe your music/style in short? What can festival goers expect from your show?
Indie rock with some pop/shoegaze elements. Festival-goers can expect some pretty cool soundscapes, interesting drum parts, a cheesy joke or two, and friendly people. I love making friends with people when we play shows, it’s the primary reason we’re there.

2 – Q: Which musical act are you most excited to see yourself at this year’s Northside Festival?
I found out about Goodman the other week and I’m excited to see them. I think they’re based in Brooklyn, but they sound like a band from the UK. I have a soft spot for catchy British-sounding rock.

3 – Q: This being your first time performing at the festival, what would be the coolest thing you think could happen?
Being there IS the coolest thing that could happen! We’re super appreciative of getting to travel and play music with each other. It’s important to realize and appreciate when things are good. Anything else cool that happens is icing on the cake. If we see some friends at the show or discover a new beer we like or something like that, we’re stoked.

4 – Q: What is in store for you in the next six months?
We’re releasing a single on a compilation with our friends on Whelmed Records! We’re also recording for our first full-length record, and there will be at least one more festival performance.

5 – Q: What’s the question you wish we would be asking?
Nothing in particular, but if you want to get us talking: ask Ryan about guitar pedals, get Grant to talk about something he thinks is dumb (it’s hilarious), or challenge me [Paige] at puns.

Paige, big THANK YOU, we can not wait to see you live! Only ten more days… safe travels and we are happy to help with the new beer or Brooklyn Brit rock discovery!

Listen to Kinder Than Wolves’ dreamy and simply super gorgeous “Hover” on Soundcloud and stream the entire EP on Spotify.