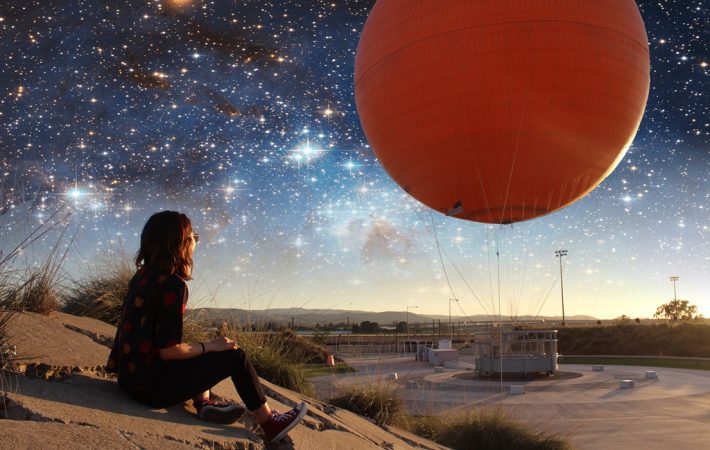 L. A. musician Darwinn Sato, who records under the name Jupiter Deluxe Tube, is about to release her debut album “Product of Insomnia” with ten dream pop songs where layered synths and guitars evoke the half-wake state of sleepless nights. It will be released not before June 2, but in the meantime Darwinn was so kind to answer a few questions giving some hints how she arrived at this point.

Listen to “Home”, the lead single of “Products of Insomnia”:

Q: What was the last song that got stuck in your head?
A: The Gorillaz/Vince Staples song “Ascension” ! !

Q: What was the first album you have ever bought? Digital, vinyl, CD or cassette tape?
A: The first time I ever went to the store myself I got Oh, Inverted World by The Shins on CD. I don’t think I even really knew what I was getting or how much it’d mean to me.

Q: Do you still possess this album?
A: Of course, and when I finally started using my money to buy vinyl, it was also the first vinyl I got. They’re usually chilling together.

Q: What’s your songwriting process like? Given that the album is a “Product of Insomnia”, do you write your songs during the night, right when inspiration hits?
A: Each song is different, so it’s hard to say. But usually I’m about half awake/half asleep when I hear the song. That’s when things start to lose sense and don’t really follow the same laws of physics and logic that we do. I actually love being in that transitional state and being aware but not awake. A lot of the time, I’ll hear a melody or see a phrase in the silence, and then the song starts to play in my head, and I’ll scramble to record the parts before I forget.

Q: If you could direct support anybody on tour, who would it be?
A: Can it be Tame Impala with Grimes? Please?

Q: If you could have any musical instrument in the world, which one would it be and why?
A: I really want a pipe organ! Not sure which one though. Organs are such powerful and beautiful machines. I love it when the emotion of a sound comes through physically, and I feel like that happens with organs, at least for me. Sometimes I’ll hear a chord and it’ll be so heavy that I can’t think or breathe, and I’m just like, “What! This was made by humans??”

Q: If you could choose to live in a decade (music, style, etc.) which one would it be?
A: Am I allowed to say the future? I’m not sure I really want to go backwards. Maybe when the environmental and social climate on Earth has improved, and we’ve also reached another planet and are discovering the land. It’d be cool exploring that frontier. I feel like fashion would be really minimalist and utilitarian, just to save resources or something, at least in the group I’d be with. There’ll probably be a few mega-metropoli, hyper digital. I feel like the juxtaposition of those two forms of existence would make for such cool art.

Oops! We forgot to ask where the name Jupiter Deluxe Tube comes from. Well, we’ll ask that next time. Until then, many thanks to Darwinn to give us these insights and we’re crossing our finger to see her opening for Grimes.

Update: the album “Product of Insomnia” is out now: