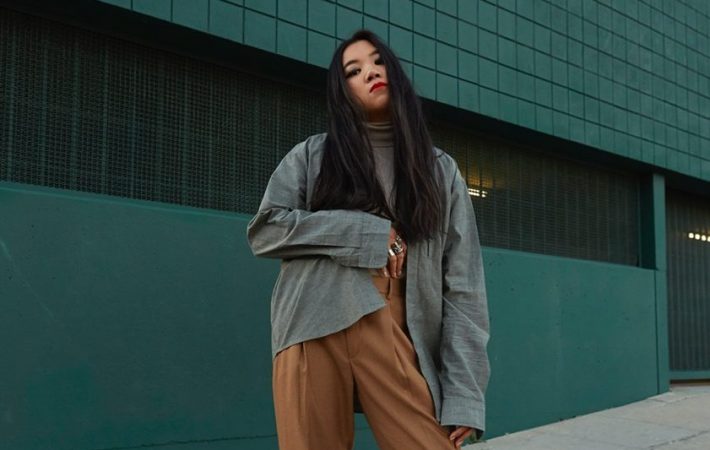 Trace is a singer/songwriter from L.A., whose 2016 debut EP “Low” (Apple Music | Spotify) introduced her as an artist who skillfully uses restrained electronics to create a relaxed, pensive vibe in her songs. This year’s new, just released single “Oh My My” is no different and makes appetite for more.

Listen to her lastest track “Oh My My” here:

Trace was so kind and answered a few questions, which sheds some light about her influences and where she might go next:

Q: What was the last song that got stuck in your head?
A: Ah, Kendrick’s HUMBLE. To be very honest.

Q: Do you have a song from your childhood, one you always enjoy hearing again?
A: Hmm. From my childhood not really anything specific but folk / and oldies country pop reminds me of my childhood–like Patsy Cline and Brenda Lee. That or jazz for sure. Miles Davis, Julie London….

Q: What was the first album you have ever bought? Digital, vinyl, CD or cassette tape?
A: CD: Jagged Little Pill by Alanis Morisette and Tragic Kingdom by No Doubt. Vinyl: Thom Yorke’s The Eraser.

Q: Do you still possess this album?
A: Yes to Thommy, RIP to the CDs.

Q: Is there a song you’d like to cover?
A: Definitely. Anything Frank Ocean would be rad.

Q: What’s your songwriting process like? Your bio says you are recording in a bathroom – is it for the acoustics or a different reason?
A: It depends! Sometimes I write on my own at home or an idea will arise in my car while driving ha (I’ll hum in my voice memo) and then I’d build it out at my house, or I’ll jam and write with a producer in the studio. I usually try my best to always write words or phrases or melodies that pop into my head and transfer it into my phone ASAP–Evernote is a gem. My process is just always be aware of what I’m feeling and what people are saying.

Q: If you could have any musical instrument in the world, which one would it be and why?
A: Probably a Steinway upright piano from the early 1900s. But like restored though antique and carries that rare warm, worn and beautiful sound.

Q: What would your perfect live show look like, if costs didn’t matter?
A: That’s a fun question. I would definitely have more than a two piece band–for fun. And the visuals would be a really produced stage. Whether it’s a curated “mini music video” for each song performed on a large LCD screen behind me or a highly designed stage with props and lighting…I definitely would be sure to involve an aesthetically pleasing visuals to accommodate the live show.

Thank you, Trace! We hope to see you for a show in New York soon!