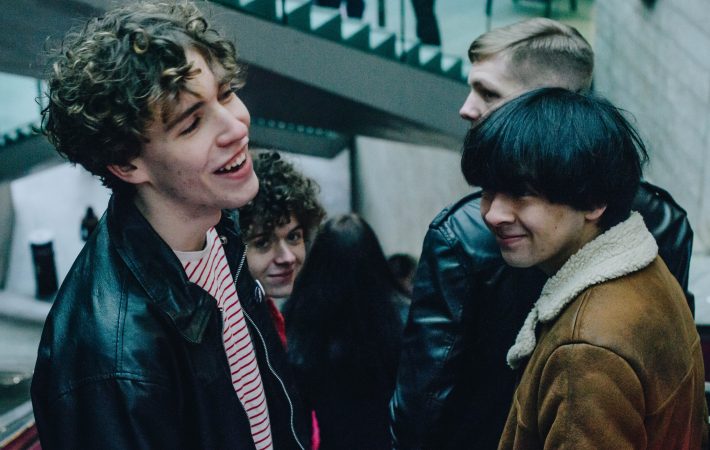 In April alone, we have featured not just one but four songs created by bands from Liverpool, England and so we wanted to know a bit more about at least one of them! We liked “Home” that much that we made it our Song Pick of the Day and can not wait to hear more from this Liverpool quartet comprised of Jonathon Quinn (vocals, guitar), Andy Power (guitar, keys), Sean McLachlan (bass, vocals) and George Whitehead (drums).

For now, we are psyched that Jonny took the time to answer our questions and then some. To get into the groove of things, listen to “Home” first:

Q: What was the last song that got stuck in your head?
A: Stranded in the Jungle by the New York Dolls.

Q: What was the first album you have ever bought? Digital, vinyl, CD or cassette tape?
A:  My first CD was the best of Bowie bc I’m a super trendy boy! I think my first vinyl was the Arctic Monkeys first album or maybe Marquee Moon by Television. STILL SUPER TRENDY.

Q: Do you still possess this album?
A: Yes bc I never lose my grasp on a trendy item!

Q: Whom did you see live recently?
A: Horsebeach @ The Shipping Forecast. They were sick and If you wanna be trendy like me pls go and listen to them!

Q: If you could have any musical instrument in the world, which one would it be and why?
A: That psychedelic avocado looking guitar that Austin from Swim Deep has would be nice. It looks dead trendy and nice.

Q: You are based in Liverpool, did you guys also grow up there?
A: We did all grow up here, except for Sean he grew up in the country bc his family own a farm out there, they also breed cats which is an interesting fact about him.

Q: If I were to visit Liverpool, where would you take me to experience great indie rock?
A: It’s gotta be The Zanzibar <3 If you’re looking for a good night out tho Shit Indie Disco is the one.

Q: What’s your songwriting process like? What comes first, melody or lyrics?
A: Usually its melody first then we’ll figure out the rest of the song. Lyrics last :’(

Q: Who would win in a Godzilla vs King-Kong style fight, Giant Morrissey or Giant Robert Smith?
A: I’d have to say Smith he’s a bit rougher and tumble isn’t he?

Thank you, Jonny. I have the sneaky feeling that glamglare just got a lot more trendy thanks to you guys!