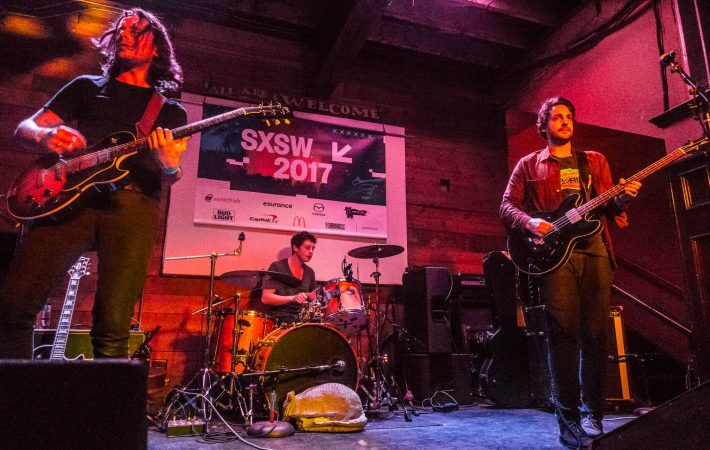 Remember your birthdays as a child? When you were hoping with all your heart to receive the present you wished so much? And when it didn’t happen? But eventually, you got what you wanted because your grandma or granddad took pity on you and gave you what your heart desired? I felt a bit like that when I found myself at Austin’s popular venue Mohawk, waiting for Desert Mountain Tribe to start their set.

I had tickets to see them in April 2016 at Baby’s All Right already but due to artists visas issued a week a too late, the three from London via Köln couldn’t start their tour in New York but had to head to the West Coast to fulfill commitments there. Bummer! Didn’t help exactly either that their gorgeous debut album with the equally appealing title “Either That or the Moon” made it into my Top 10 list of 2016 albums. I really wanted to see them live and was maybe anticipating their live gig a bit too much?

Luckily, not because Jonty Balls (vocals, guitar), Philipp Jahn (bass) and Felix Jahn (drums) did not disappoint! Equipped with only vocals, guitar, drums and bass, no extra live band member, no (visible) computer gimmicks, they just used their pedals and their talent and put on a soulful, inspiring live show. So. Good.  Double happiness, because I could see Desert Mountain Tribe back in New York as well when they played a gig at Berlin Bar, together with one of my fav New York bands, Dead Leaf Echo. Well, there’s never a 2nd chance to make a first impression so make the first one count and they so did, at Mohawk.

If warm, fuzzy, psychedelic guitar driven sound is your thing, check out Desert Mountain Tribe’s album on Spotify and iTunes and see them live if they play anywhere near you – currently on tour all over Europe!