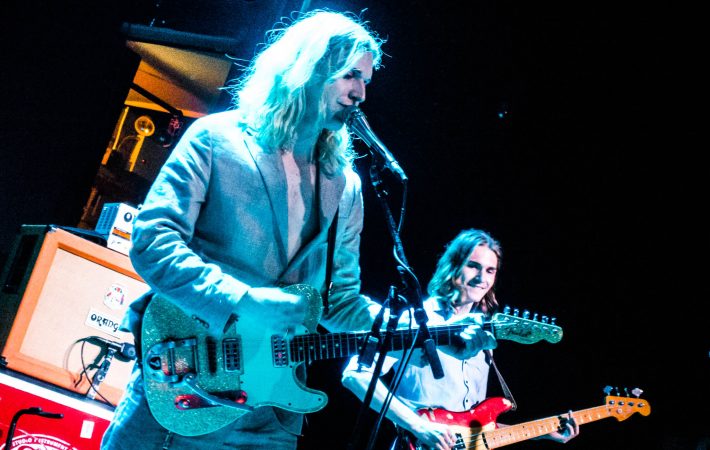 Sundara Karma, are an exciting indie-rock quartet from Reading, England who create dreamy guitar driven sound with infectious hooks and rather unique vocals. While I wanted to see the four for a while, it hasn’t worked out before but finally it did, a week ago when they played Rough Trade NYC.

Despite being a fan of theirs since their 2015 released EPs, including their February 2017 full length album with the cool title “Youth is Only Ever Fun in Retrospect”, I didn’t know what to expect from them live. Somehow I did not expect to be utterly charmed and absolutely loving their live performance! Aside from frontman Oscar Lulu, also Ally Baty (guitar) and Dom Cordell (bass) sang backing vocals and put on a lively, fun show together with drummer Haydn Evans.

Sundara Karma had the audience on their finger tips and were responsible for a lot of happy faces. After the show, long after the show, fans still gathered and Oscar & Co. did not get tired to chat and pose with fans for photos. Extra kudos for being so nice and approachable.  Hope to see you guys again!

(Click on a thumbnail to browse through the entire gallery.)

Listen to “She Said” here and find Sundara Karma’s new album “Youth is Only Ever Fun in Retrospect” on Spotify: