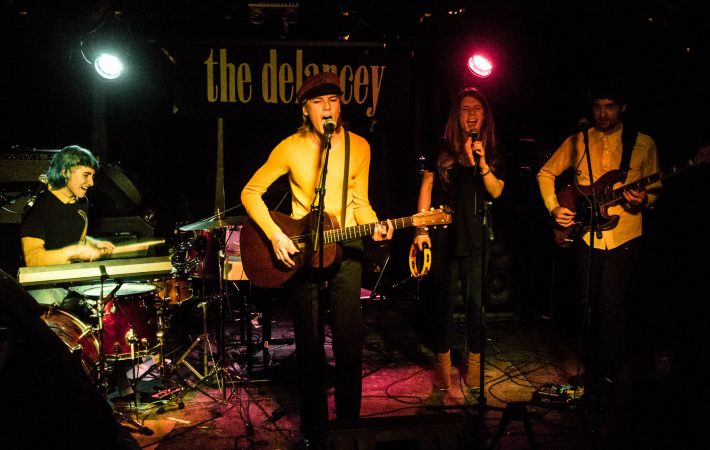 The weather gods have been kind of nice to us in New York this Winter but now and then they throw a curve ball and we got one in form of torrential rain last Friday. Luckily, true music fans show up no matter what and so we had an impressive crowd of people in attendance who were part of a really great night with some magic thrown in.

Opening the night were The Rungs, who create lovely pop songs with catchy melodies and while we’ve seen the duo a few times live before, this was the first time as a trio with a pretty rad drummer who rounded the performance out perfectly. Aside from their charming single “Whispers”, The Rungs were performing some of their new songs too whom they will be releasing soon. Something to watch out for.

Raina Bee & The Hive were up next and they take inspiration from all kind of genres, blend them skillfully together and let Raina’s beautiful vocals and stage persona shine. They might have kept the best for last, or let’s say the most surprising towards the end of their set because that’s when Raina brought a rapper on stage and they performed together. Great fusion!

Find the debut album of Raina Bee & The Hive on Spotify.

Closing the night were GIRL SKIN, who blend singer/songwriter folk with grunge and sparkles of pop and flower power thrown in. They flourish their gorgeous music with their very own style which doesn’t take away from the sound but solely enhances it. Here is a band who understands what ‘live performance’ means, something beyond of playing your material in front of an audience. While the first half of GIRL SKIN’s set was more vocal and guitar driven, the second half was dominated by vocals and keys and this made for an inspiring sonic and visual variety. Sid, Bailey, Sophie and Alex managed to create a magically joyous vibe and ended the night on a high note.

Big THANKS to all artists and fans who came out. Let’s do this again, shall we?