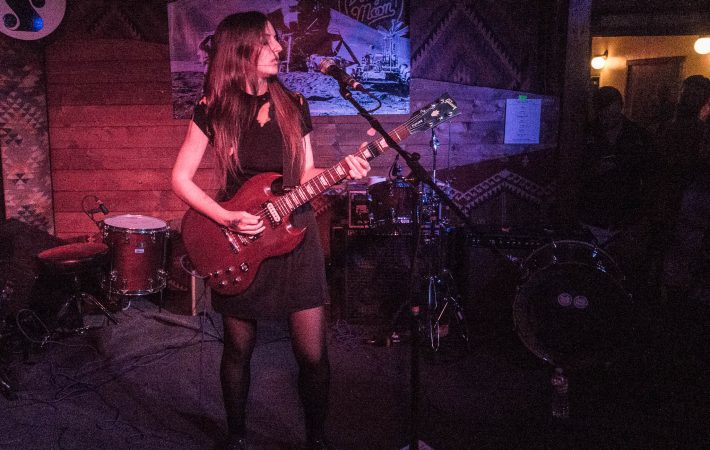 Saturday is wind-down day at SXSW. There are still many music showcases around town, but many artists are through with their shows and are enjoying themselves or have left town already. Also, many attendants who treat SXSW as work rather than fun, prefer to spend the weekend at home.

No slow-down at the British Music Embassy though. Their day party included Her’s and Fifi Rong, the China-born singer/producer from London presents her catchy synth pop with a beautiful performance.
Across 6th Street at BD Riley’s Sounds Australia, did another event to showcase the excellent 2017 Australian delegation. We saw Josh Cashman and Beth Brown performing.
After that we had an excellent time in the Registration Lounge, where we discussed music with a diverse, international group of people. Among them South African singer/songwriter Veedesha, who did not perform this year, but warmed our hearts with her upbeat, can-do attitude towards art and life.
We knew long in advance that we would spend the last festival night at the Sidewinder for the joint two stage showcase of Fancy PR, Burning Ear and Vinyl Moon. If we had had the opportunity to curate our own showcase, it probably would have looked similar to this one.

First up was Italian singer/songwriter Giungla, who combines gritty electronic beats with heavy electric guitar sounds. At glamglare we are big fans of her for a long time (she provided our Song Pick of the Day music here, here and here) and are happy to report that she is as good live as recorded.

She was followed by Linying, a singer/songwriter from Singapore, who caused a splash with her debut EP “Paris 12” last fall.

Next up was a new discovery for us: Canadian/American indie rock three-piece Dyan, whose singer Alexis Marsh plays saxophone in addition to the keyboards.

We were impressed with the live show of French-Canandian musician [Charlotte Cardin] already before, at her gig at Rockwood: she just gets the mix of a traditional singer/songwriter performance and forward-looking electronics right.

The Brighton project Phoria was on next: they hauled so much gear on the small stage that the stage floor looked like a snake pit of cables. But they managed to not entangle themselves and perform the beautiful eclectic music of their 2016 debut album “Volition”.
That all happened while an eclectic group of acts performed at the outdoor stage: Chain Wallet, Yoke Lore, The Shelters and Coucheron all played, while there were many musicians in attendance: Hana and JJ of Overcoats, the two guys from Her’s, Mt. Wolf’s Steve McMinn and to my delight Elle Graham aka Woodes, whose performance I loved so much the day before.

Together with her, her band and manager, we saw the last act of the night: Brooklyn duo Salt Cathedral. Their show has evolved a lot since we saw them the first time at CMJ 2014 and we are looking forward to their debut album, announced for this summer.
And with that SXSW 2017 came to an end: it was different from the pervious years, but for us personally maybe the best one yet. We’ll be back 2018.