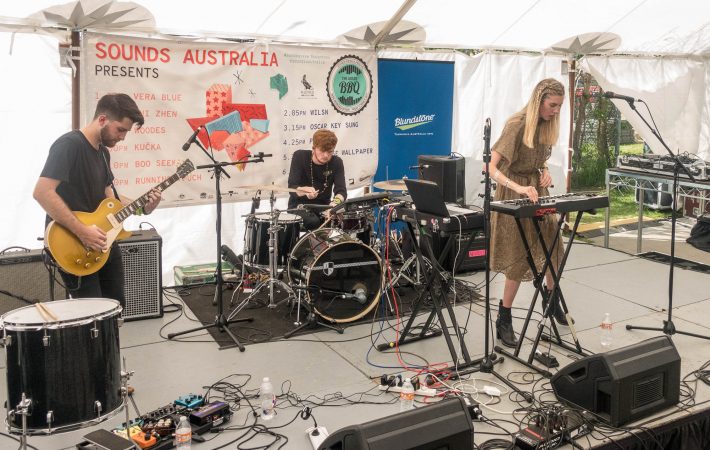 We had nowhere special to be on Friday, so we could take advantage of the various day parties in town. The Aussie BBQ featured this year a second “electronic edition” with an exciting lineup. First on was Vera Blue, who does bright pop with lots of vocal expression and is – according to the announcer – the next big thing Down Under.

From there we went to the British Music Embassy at Latitude 30 once more, just because its such a cool place. Northern Ireland presented artists during the day: we saw Ryan Vail, who effortlessly mixes danceable electronics with classical influences and – as opposed to other producers – does not shy away from singing himself. A great discovery.

Canada was next: the Canadian Blast took place on the two stages of Swan Dive. We caught the set of Casper Skulls, which we both liked a lot: intelligent indie rock with alternating male/female vocals.

Back to the Aussie BBQ we saw Woodes again and she is just fabulous: unassuming, but beautiful vocals over sleek, subtle electronics combined with a friendly, charismatic appearance make her my favorite festival discovery.

For the evening we went back to Latitude 30 to catch the last songs of Welsh singer/songwriter Casi, before Liverpool indie-rock five piece The Vryll Society took the stage.

Over at The Main II we saw Mt. Wolf once more (Elke missed the first performance on Wednesday). Behind a wall of fog with less light than at their Latitude 30 show, their performance felt darker and more mysterious.

For the last show we went back to the Iron Bear Bar West of Congress Ave. Sui Zhen was on with a unique performance. Her four-piece band creates eclectic sounds that transforms the room.