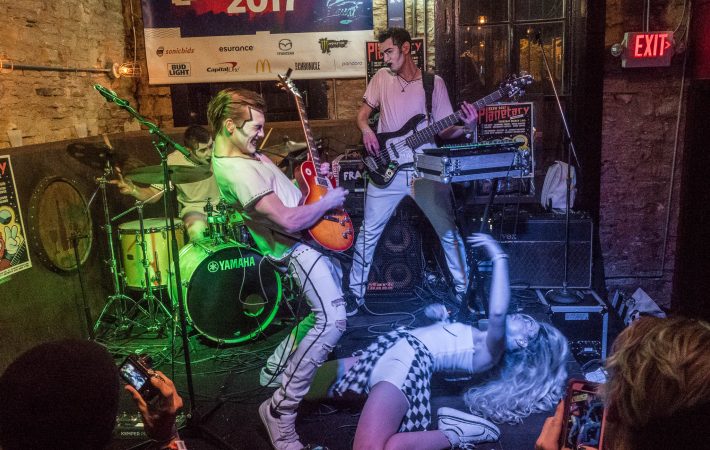 We started the day at Brush Park, where two day parties took place: The Aussie BBQ, which showcases Australian artists every year and the Sounds Of Spain party. After a quick visit to the first one, we hung out a little at the Spanish party, where they serve delicious paella. Joana Serrat played a quiet, beautiful set, just right for the moment.

Over at the Cedar Street Courtyard, another festival-in-the-festival happens every year at SXSW: FloodFest. There Frenship took the stage with a powerful, fun show. Their band name may well be their mission: they projected friendship and friendliness among themselves and with the audience.

The first evening show was Scottish singer/songwriter Elle Exxe. At some point she confessed to the audience that she dreams of “bigger stages and bigger productions”, but that doesn’t keep her from dazzling and wowing her audiences in the corner stage of a bar like Tellers. Great songs, great vocals, great visual effects. Go see her before she will inevitably hit those bigger stages.

From there we went to the east side where the massive Levitation showcase set quarters at Hotel Vegas. Four stages and who knows how many bands played there. We missed Tempers, but were there in time for the set of Brooklyn producer Pastel Ghost. Her show visualizes her name: like a ghost she hovered behind pastel-colored light sticks, playing her melodic synth pop.

Too many things were going on at the same time, but luckily we ended up at the set of Winter a four-piece around singer/guitarist Samira Winter. A projection of psychedelic color patterns made the stage look like a painting, which fitted well to their rough edged dream pop.
We stuck around for local legends Survive who took on the classic Kraftwerk formation: four synth stations in one row. The music is more in the line of French electronic music pioneer Jean-Michel Jarre.

Last show of the night was a festival highlight for me: Canadian producer Marie Davidson filled the room with hammering beats, but she also speak-sings over it in French and English. When the police came to enforce the 2 am curfew, she waved them off: “I’m not done yet”.