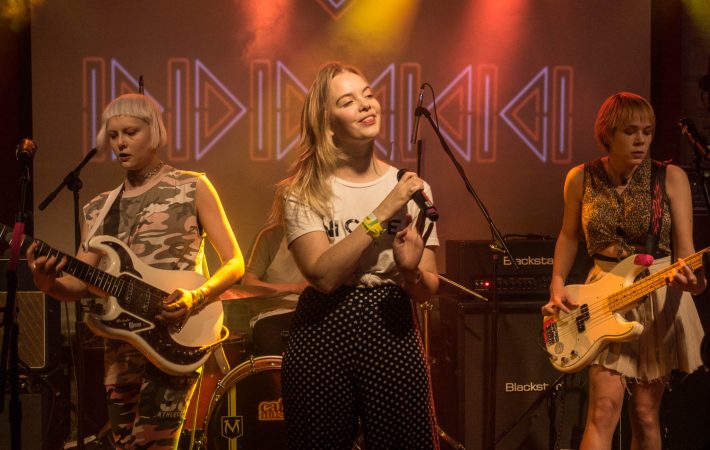 Originally we wanted to start the day with a panel discussion at the Austin Convention Center, but the rooms were filled to capacity, so we had some extra time at our hands. What to do now? At the East Tent there was an event (free breakfast!) with live music, but nothing that could capture us for long. The Nashville showcase at Tellers had not yet started, so we ended up at the hotel room doing some work.
Later in the evening, after spending time in line for the Music Opening Party at Maggie Mae we finally saw some live music at the British Music Embassy which, like in previous years, takes quarter at Latitude 30, one of the nicest small venues in Austin. Dream Wife was on with their first show on U.S. soil. Alice, Bella and Rakel were my favorite act at Iceland Airwaves last year and they are more than ready to take it to the next level: Rakel enjoying the wireless mics on stage declared: “I feel like Britney Spears!”

Next up were London five-piece Sweat, who do danceable electro rock with some dark undertones. Super cool music and an engaging stage performance.

It is our fourth SXSW and yesterday was the first time we made it into one of its most iconic venues, Mohawk and we celebrated the occasion with seeing four bands in a row.
We caught the last song by instrumental three piece Casual Strangers, before English/German psych-rock three-piece Desert Mountain Tribe took the stage. Their music is epic and immersive and we have tried to see them live for quite some time. It was worth the wait!

They were followed by Ruby, who does slick, cutting-edge electronic music since the 90s. At some point she brought a fellow member of the supergroup Pigface on stage for a duet. So cool!

The night could not end better than with local legends Ringo Deathstarr, a three-piece doing uncompromising rock with alternating male and female vocals.