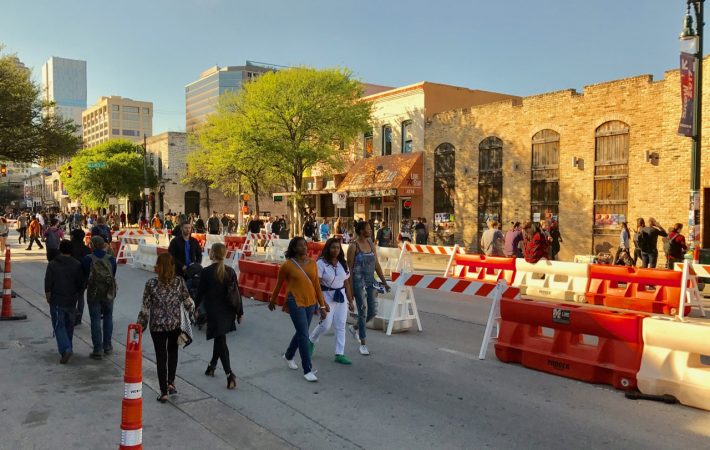 We are in Austin again, for the fourth time. Things have changed a little bit in the 31st year of the festival. A new logo with fresher colors (we appreciate the departure from primary green for the music badge), new rules for event access and the music track is one day longer. That means one more (expensive) night to stay, but in the grand scheme of things we consider us lucky: if we hadn’t flown out a day earlier, blizzard Stella would probably had wrecked havoc to our travel plans.

On the downside, on Monday SXSW was still full in Interactive and Film mode so there was no live music for our lunch at Darwin’s on 6th Street and there was even a cover band playing next door. It took us 45 minutes in line at the Pandora enclosure to finally catch our first show: electro rock four-piece Pvris, who belongs to the more well-known acts who seem to return to SXSW in larger numbers again. But they are a glamglare-featured band (pardon our appearance, it’s an old post), one that we overlooked in our preview playlist.

Meanwhile, we learned via social media that Idgy Dean is playing SXSW officially, even though she is not listed as an artist. This was an opportunity to take advantage of the “secondary access” for all badge types to almost all events. NCC Media had their party at the Parlor Room on Rainey Street with Idgy Dean being their featured artist. We are big fans of hers for a long time and it was exciting to see how she perfected her live show, bringing new elements to her music. She told us that a new album is planned for Summer with new videos.

After a quick pit stop at SXBites, the hipster food truck park at the end of Rainey Street, we rushed to Cheer Up Charlie’s, where this year’s Moog showcase took place. We could see or better only hear electronic music legend Susanne Ciani creating sounds on surround speakers with fancy looking analog equipment. Aside from her live performance, SXSW Film also includes a documentary “A Life in Wave” about the artist.

Next up was Ellie Herring showcased a more danceable brand of electronic music on digital hardware: her beats kept the crowd moving and the energy level high as the clock moved towards midnight.

We wanted to do one more show and went to the German Haus which was set up at Barracuda. There we were fed (too) well with German-inspired food, before
Berlin garage rock duo Gurr were on. Andreya Casablanca and Laura Lee, accompanied by a bassist and a drummer, play rough but catchy pop songs and convince with their stage presence.

It was remarkable that the places were all well visited for a Monday night: it could be that the strategy to move the three tracks of the festival closer together pays off and more attendants become interested in the music showcases.