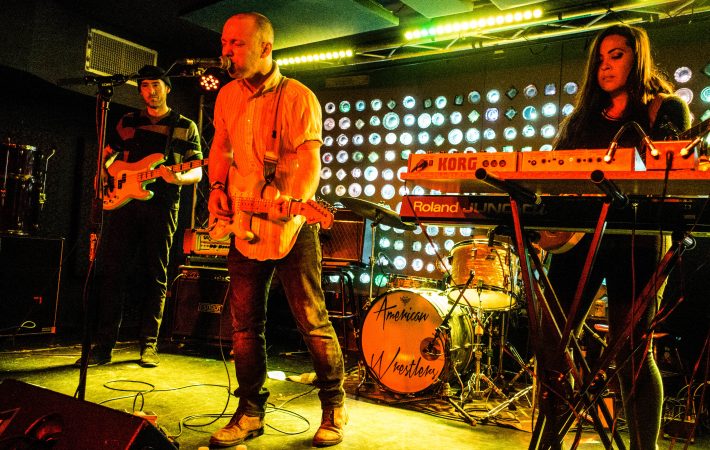 American Wrestlers‘ self-titled debut album gathered critical acclaim and following up attention and success is never easy. Yet “Goodbye Terrible Youth”, out now on Fat Possum, can easily hold with its predecessor, it is yet again a decisively lo-fi album, packed with beautifully crafted, personal and meaningful songs.

Seeing American Wrestlers live, was on top of my list for quite a long time, and finally December 7th, 2016 the day had come, when the quartet played Baby’s All Right. This was a fine show for music lovers as the four musicians on stage around frontman Gary McClure (from St. Louis-by-way-of Scotland) brought older and new material to life.

Towards the end of the show, Ian Reitz (bass), Josh Van Hoorebeke (drums) and Bridgette Imperial (keys, guitar) left the stage to leave the spot light to Gary McClure, which made the roughly ten minutes that followed all the more powerful and mesmerizing.

And the best? American Wrestlers’ tour is not yet over but it actually kicks off again TODAY! Listen to “Amazing Graze” and “So Long” from their recent album, check out our Brooklyn show photos and then go see the band live when they play in your town, dates further below:

To get an idea what American Wrestlers would actually look live, watch this pretty cool band video for “Give Up”:

… and then go and see American Wrestlers live: