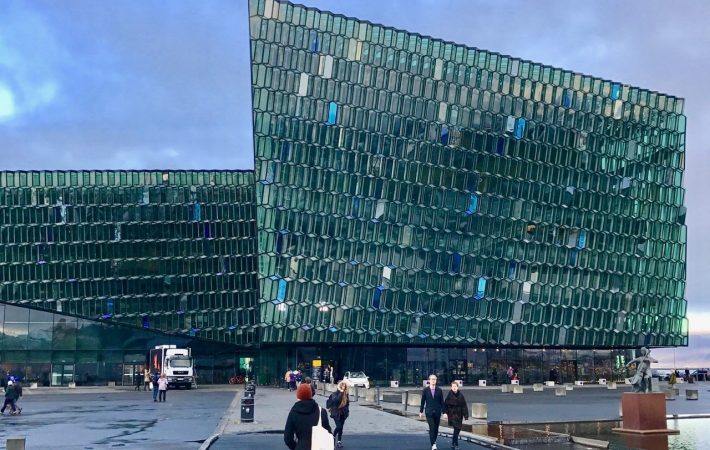 Slightly jet-lagged we were climbing up the stairs to the bar of the Loft Hostel. There, the German singer/songwriter Josin was playing her beautiful, quiet songs. In front of her were people lounging on the floor, behind her, painted on the wall, was the logo of Iceland Airwaves 2016. We had arrived at the world’s coolest music festival, figuratively and probably also literally.

Once you appreciate the fact that the quality of music is only loosely correlated with its popularity or the size of the stage it is performed on, then showcase festivals like Airwaves, SXSW in Austin or The Great Escape in Brighton are for you. There the action does not happen in an enclosed area with a couple of stages, but all over town in typically smaller venues. In the case of Airwaves it is Reykjavik, the charming capital city of Iceland. Certainly, you can see there also a few big name artists – for example PJ Harvey was there and Björk too. But mostly it is about more intimate shows, where you can see the artists from close-up and even have a chat with them after the show.
Airwaves includes two types of events: showcases in the evening are for registered attendees only and take place in ten venues around city, from the halls of Reykjavik’s beautiful concert and convention center Harpa over a sports arena to smaller rock clubs like Gaukurinn and Hurra. During the day there are free for all so-called “off-venue” shows that are stage in shops, bars and restaurants as well as two hostels, like the before mentioned Loft. Unlike SXSW though, Airwaves puts out a schedule for the daytime shows as well, but it is often changing, so downloading the app and using it for planning is a good idea. I’m sure that a completely unofficial part is happening as well, but we were not able to unlock it this time.

Airwaves is a good order of magnitude smaller than SXSW (the whole country of Iceland has less than half of the inhabitants of Austin, Texas). The festival rules make sure that a a large part is reserved to Icelandic artists, which is all right, given the incredible quality, creativity and diversity of the local music scene. Aside from Björk everybody probably heard of Sigur Rós, Gus Gus (both did not participate in 2016) and Of Monsters and Men . But right behind them are internationally known acts such as Samaris, Vök or Mammút. Then there are those who seem to be poised for worldwide success: Dream Wife, Fufanu, East of my Youth, Soffia Björg, Audur, Emmsje Gauti, Hildur and Milkywhale to name a few out of those we have seen live.

In 2016 Airwaves also featured a fine lineup of international acts: some of our long time favorites Warpaint, Fews, Jennylee and Doomsquad played, as well as Kate Tempest, Let’s Eat Grandma and many others from Europe North America and Australia.

We saw too many shows to list them all and you can find select reviews on glamglare. But to just pick one show to highlight what special kind of festival is Airwaves: Reykjavikdætur (“Daughters of Reykjavik”) is a 14 piece, all-female hip hop group, which brings their message over even though they rap mostly in Icelandic. Their performance leaves you breathless with countless did-that-just-happen moments.
Iceland Airwaves is a unique music festival with a vibe you will not find anywhere else. Throw in a country of breathtaking beauty and a good chance to make new friends – you will run into the same people, fans and musicians again and again – and you should be off to plan and save for a visit in 2017.