PHOTOS: Fufanu Put on a Show to Remember at Harpa for Iceland Airwaves 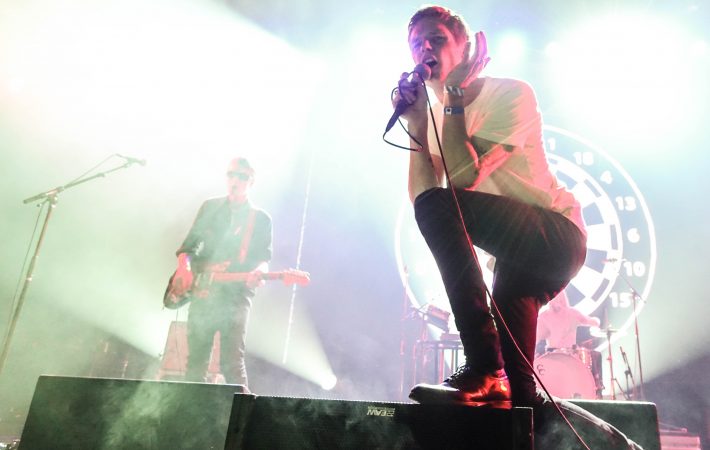 PHOTOS: Fufanu Put on a Show to Remember at Harpa for Iceland Airwaves

Fufanu are without a doubt Iceland’s most exciting experimental post-punk band and if there was still proof needed, their show at Harpa Silfurberg for Iceland Airwaves 2016 was it! Granted, a posh and huge venue (capacity 800) and a large stage with a great light show are obvious ingredients for an overall impressive experience. But this alone doesn’t make for a show to remember, there are people needed who bring the music to life.

Kaktus Einarsson (vocals, programming) and Guðlaugur Einarsson (guitar, programming) are the core members of Fufanu (formerly Captain Fufanu) together with Erling Bang (drums). Live they were also supported by Sexy Lazer on bass. The act that played directly before Fufanu that night were fellow Icelanders Singapore Sling, whose show was pretty amazing too. Erling Bang was on synth and mostly maracas duties during their set. Kudos to true musicians who not only play one but two shows – commitment has my deepest admiration.

After Singapore Sling’s set which was mostly kept in white and red lights, Fufanu took the stage bathed in blue, with projections of stylized sports gear in the back. They opened their set with the super chill “Sports” and later in the gig they played “Bad Rockets” both are taken from their upcoming album titled “Sports” with a release date February 3rd 2017. Fufanu gave also room to older, and equally treasured songs like Circus Life or “Your Collection“.

While guitar, drums and bass remained mainly in the background, the stage belonged to singer Kaktus, who charmed the audience and had them mesmerized and focused on him. Kaktus took advantage of the big stage as well as the packed room and kept the crowd on his fingertips. He even ventured out to the floor and wandered around for a while.

When I saw Fufanu again two days later at the super tiny, off-venue Bar Ananas, the music was equally awesome – of course it was – and Kaktus still tried a few of his performance  elements but there was no room for that. In essence: if you have the chance to see Fufanu live, do so. Until I can see Iceland’s hottest indie rock band again, well, there are some photos to remember this amazing time:

To support their upcoming album, Fufanu go on a tour in the U.K.
Fufanu Tour Dates