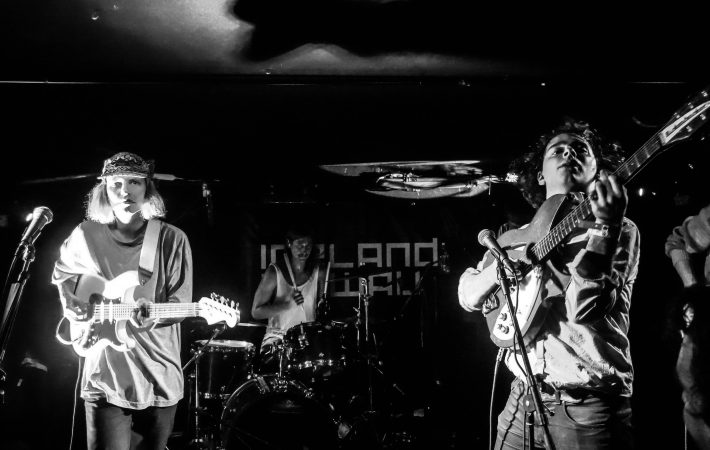 With more than 220 bands performing in about 9 official venues (and several dozen off-venues) during the 5 days of Iceland Airwaves music festival, it is almost unavoidable that at least 2 bands you’d like to see play at the very same time at different venues… and so I had to cut short my stay at HARPA for Warpaint, to not miss FEWS, playing a 15 minutes walk away in the Gaukurinn, a truly classic rock-club.

The atmosphere there is great and every show we attended was jam-packed and FEWS’ gig was no difference! I wiggled my way as far to the front as I could get, only stopped short by a few tall people in front. “Are they any good live? I haven’t seen them yet”, asks one of my neighbors into the room and so I assure him, that FEWS are one of the best live acts I’ve seen all year. And definitely topping my personal list of non-Icelandic must-see acts of the festival.

The Swedish/American U.K.-based quartet FEWS did not let me down – or the excited audience for that matter!
Fred (vocals, guitar), Rasmus (drums), Alexander (guitar, vocals) and Jay (bass) played from their album “Means”, which they released earlier this year, including their first single “The Zoo”, always a fan favorite. For the last two songs they had a “special guest” on stage playing synths.

Catch FEWS while they’re touring with The Pixies (yes!) or while they’re on their first headline tour through Europe starting next year. Here’s hope they also make it to the U.S. in particular New York City again. For now, some photos:

To get an idea what FEWS sounded like at Iceland Airwaves, have a look here – it’s just a glimpse of what will await you when going to a show of theirs. Do it: