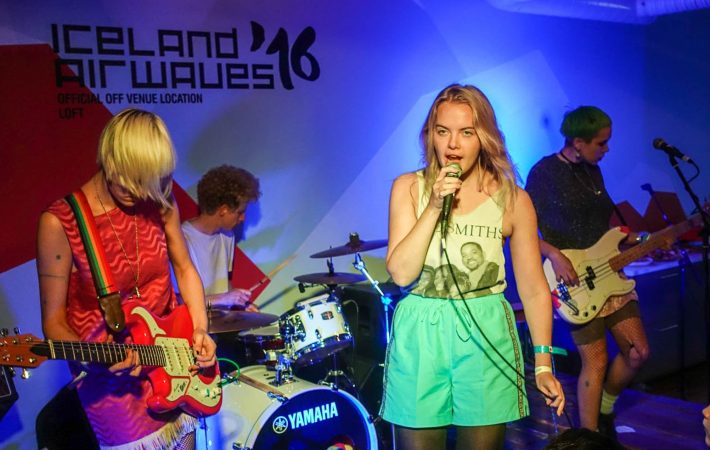 From all the excellent shows at Iceland’s magical music festival Airwaves, I would not hesitate to name Dream Wife as my favorite. The Iceland/U.K. three-piece of Rakel Mjöll (vocals), Alice Go (guitar) and Bella Podpadec (bass) as well as a live drummer nails it on stage with a perfect show, sonically and visually. Their guitar-driven indie pop brims with energy and they have left their origins as a “fake girl band” far behind: this feels more serious than they might be aware of.

In part, this is courtesy of singer Rakel Mjöll’s extraordinary vocal delivery. She raps more than she sings and she fires every single word into the audience for maximum effect. You get an idea on their recorded music, but live her performance is simply breathtaking.

We saw Dream Wife three times, two times on big stages at Gamla Bíó and Harpa Silfurberg and another time for an intimate show at the Loft Hostel, where a group of children was in attendance. No wonder that so many Icelanders become musicians: being exposed to such great music at an early age must have an effect.

Listen to  the stunning “Heartbreaker”: